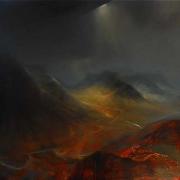 The Onslaught of Autumn exhibition at Union Gallery is misleadingly named. No gorey stags drip from the rafters, no skeletal forms litter the floor. Instead, this is a colourful and positively uplifting celebration of mostly Scottish land, sky and seascapes, with a few oriental fish thrown in for good measure.

Three enormous works by Beth Robertson Fiddes dominate the exhibition space. 'Luskentyre' featured in an earlier preview, but her dramatically lit 'Glen Coe' (right) – viewed as if descending into Mordor for the first time – and 'Tiree' (mixed media on panel, below) are also well worth a look. The latter depicts the sea from close to – its huge, cold, emerald convexity sluicing into a narrow cleft at one's feet. This is a work which is true to a moment in time and space, but also manages to convey the watery enormity of an entire planet. I found it a powerful, moving and deeply satisfying image.

Mark Nicholas Edward's well-muscled fish have shown before at Union Gallery, and have no exclusive connection to Autumn or any other season. However, who am I to carp? Meticulously arranged, sensuous forms, they are shown gliding in and out of foliage on the water's surface, brilliantly patterned, capable of sudden and prolonged disappearance in the inky depths below. I have never liked the real thing – those bloated, pouting phalluses in the Botanic Garden hothouse – but these I can admire for the skill, clarity and decorative cleverness with which they are rendered. See 'Genjii II' (acrylic on canvas) below.

Melanie Williamson is an Australian artist who has fallen in love with the muted blues, whites, greens and browns of more northerly lattitudes. Her 'Grey Day' (oil and wax on board) is attractive for its modesty, the apparent simplicity with which form, palette and framing combine to make something beautiful of what – described baldly – would sound like a dull scene on a boring day. If anything, I preferred this to her more active approach in 'Dark Sky' previewed earlier.

I don't know whether it's my fault, but since I foolishly suggested that he was undervaluing his work in June, Ian Rawnsley's seascapes have steadily risen in price. There are more examples of his characteristic fascination for storm and wave here, of which my favourite was 'Rough Seas V' (below). Rawnsley has an uncanny knack for capturing skies – rain filled or wind-strewn – without appearing to make very much effort. I don't know quite how these meteorological effects are achieved in technical terms, but for all their economy, perhaps because of their economy, they are to my eye the most convincing and evocative here.

Helen Cashmore's approach to Scottish landscape is a colourful joy to behold, but one of her paintings departs here slightly from usual form. 'Autumn Night Blues' (acrylic on board) depicts a land under a crescent moon, its contours, shadows and distances conveyed – as the title suggests – in various subtly varied blues. (This photo does not do them justice.) The scene is humanised, or perhaps mystified, by a sudden glimmer of red in the middle distance. It could be firelight, it could be a passage to hell – whatever it is transforms the work as a whole in a way which I loved.

Finally, two works here by Drummond Mayo again have nothing whatsoever to do with Autumn, but hats off to gallery owners Alison Auldjo and Rob Dawkins who never let the name of an exhibition get in the way of superlative painting. 'Aquarium' – visible in the window from Broughton Street – will have its own particular admirers, but to my mind 'The Milliner' within (acrylic on board, see very foot of page) is even better. Another superb assemblage of form and mouth-watering colour, like 'Sanctuary' – reviewed in June – it resolves itself into meaning when the viewer takes a few steps back and relaxes. Quite breathtaking.

Also on display this month are some miniature landscapes by itinerant artist Tadeusz Dereyowski. His is an interesting story, to which I'll return in a separate review later.  AM

Onslaught of Autumn will show at the Union Gallery (45 Broughton Street) until 7 November.