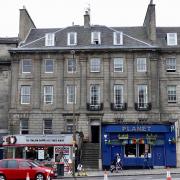 Cornerstone Property Development’s application, for retrospective change of use from residential (class 9) to short-stay serviced apartments (class 7), accommodating a maximum of 61 people, was heard by the Development Management Subcommittee following a site visit on 8 August.

The decision was reached despite an earlier recommendation by a Planning official that permission be granted. That official suggested in a Report that predominantly mixed-uses rather than predominantly residential ones in the immediate area meant there would be no loss of residential amenity and no breach of Policies HOU 7 and DES 5a. 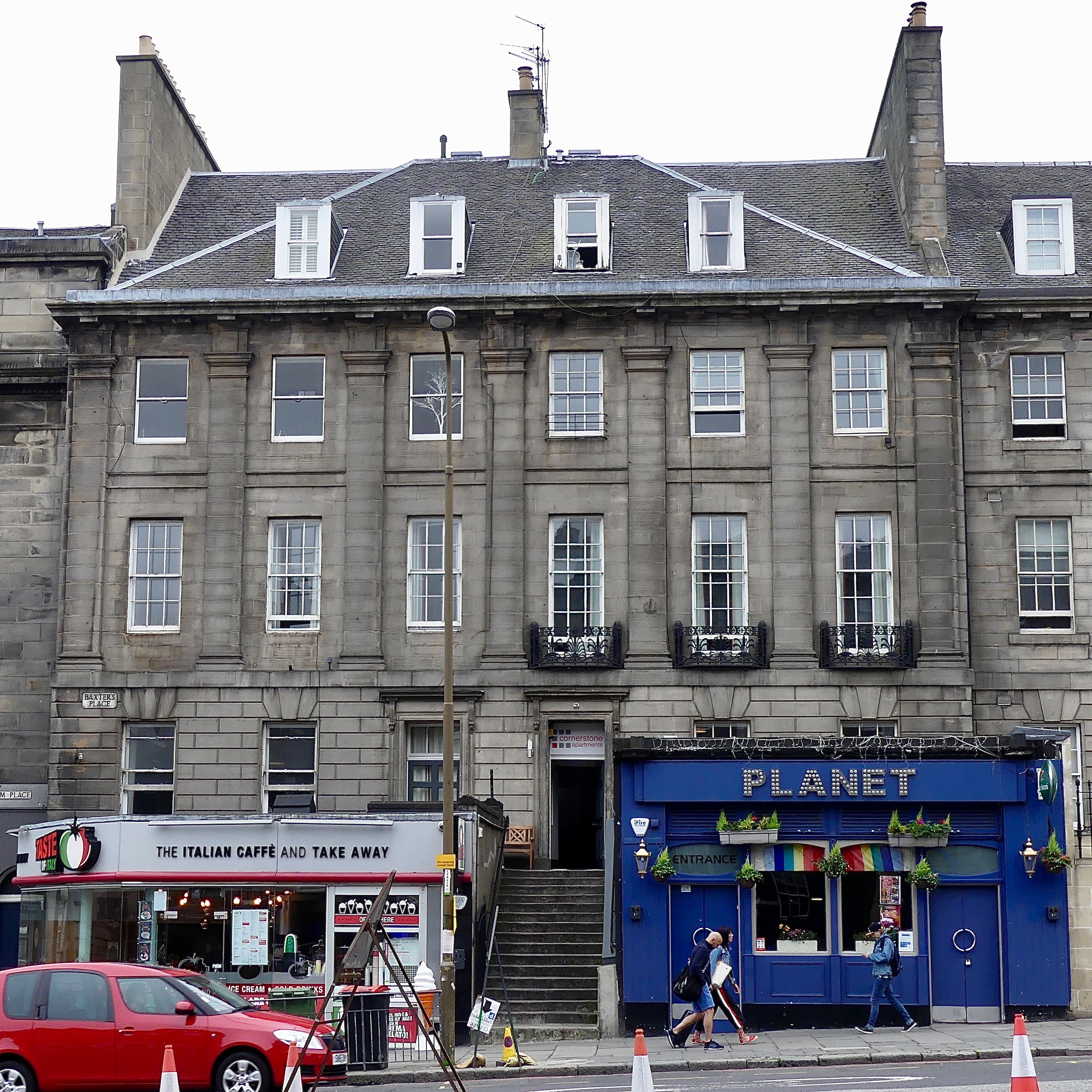 Three local residents made a joint presentation at the hearing. They were keen to make their case in person since earlier evidence provided to officials had been ‘dismissed’, missed, or ignored.

They pointed out four well-managed commercial properties in the area, but also numerous neighbouring residential properties. Residential use comprises about 50% on the street (Nos 1–9) and predominates in the tenemental block at Nos 7–8 (since the current use for short-term lets is not consented while residential use is).

Access to the flats is by key-safes. The supposedly staffed reception area, which the developer and Council officials have said would help prevent or control bad behaviour, is in fact currently available for rent (sleeping 6).

The six flats, which have been operating commercially for 18 months, match the Council’s definition of ‘party flats’.

The locals reiterated concerns about potentially inadequate fire precautions in such a densely occupied building (so far considered immaterial by Planning officials), and voiced disappointment that their numerous complaints to the police about noise and disturbance had not been mentioned in the Council’s Report.

As examples of bad behaviour by guests, they listed a pillow, cigarette butts, bottles and men’s underwear as among items which had been thrown down from the party flats to the rear. Bottles and other items had been thrown upwards into the roof gutter on both sides of the block.

Two commercial properties below the flats have been flooded, with Cornerstone Properties not present to manage the situation for several hours. Sewage and wet wipes had also leaked from the flats into back-greens below – presumably a consequence of intensification of use. In the Council officer’s Report, this had not been considered a detrimental impact on residential amenity.

The three locals concluded that it is ‘ludicrous’ to suggest that 61+ noisy neighbours (some extras on campbeds) has no effect on residential amenity. Their drunken song, shouting, smoking, banging of doors at 2 o’clock in the morning and use of adjoining roofs as balconies, are unacceptable.

Residents face the terrifying prospect of a catastrophic fire. In answer to Subcommittee members’ questions, they detailed disturbed sleep and growing anxiety. The situation has ‘definitely affected our quality of life’.

Council Enforcement in the past, they say, has not worked. Documentary evidence of commercial use was deemed insufficient. Officers wanted to see the activity with their own eyes, but – as their letters to the owner went unanswered – they were unable to gain access. Enforcement has proved slow and ineffective and was eventually paused in October 2017 before the applicant submitted the current retrospective application months later.

Councillors thanked the deputation for a comprehensive and robust presentation. 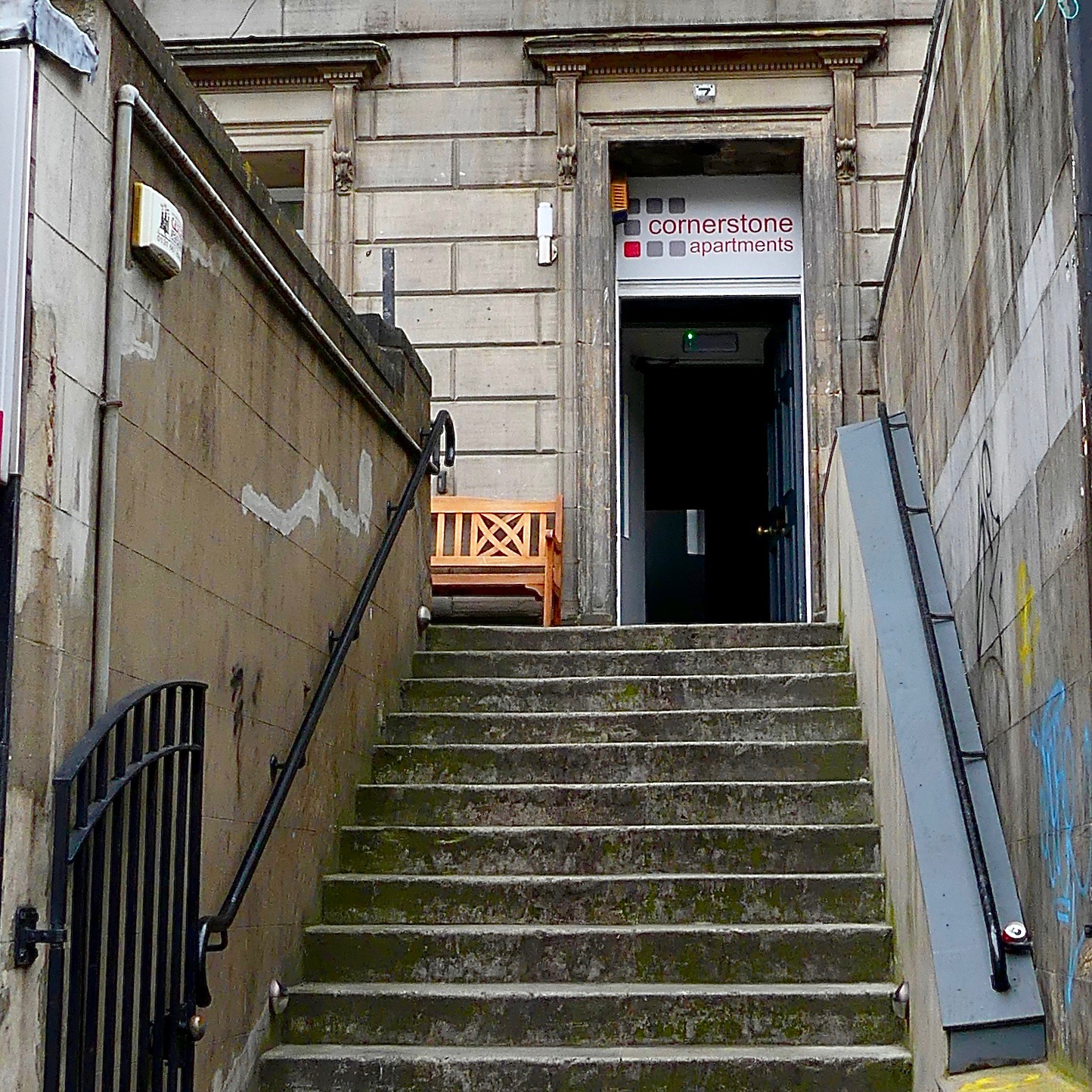 THE CASE FOR THE DEVELOPER

Next, Mike Hyde of MH Planning Associates (Cornerstone’s agent) addressed the Subcommittee. He said the key Planning issue here was whether the short-let properties had a materially detrimental effect on the living conditions of nearby residents. He thought it was relevant that prior to being run as a hostel, the property had been used as a social club.

Policy HOU 7 does not apply, he argued, because predominant uses nearby are not residential. Nor is there an important residential element locally. There would be no significant adverse effect, and in any case (quoting a Council officer commenting on a separate case) it is unrealistic to expect city-centre dwellers to enjoy the same level of residential amenity as those elsewhere.

Mr Hyde said the owner has promised to create a reception area in future. A member of staff would be on-site for most of the time, but would be contactable 24 hours a day. (This would require an additional change-of-use application.) This would meet the requirements for class 7 use and allow the business to operate as a hotel/hostel. If no reception were provided, then the applicant would be in breach of planning permission and a further change of use would be required for the premises to operate as sui generis short-term apartments.

He shared the Chief Planning Officer’s view that there would not be a sufficiently bad effect on residents’ amenity and urged Subcommittee members to follow his recommendation and consent the application.

Councillors struggled to understand why one flat had not already been converted into a reception area to show good faith. Mr Hyde said a time-frame for creating the reception area could be included as a condition of granting planning permission, but it could be begun almost immediately, even if that meant cancelling bookings.

Improved management to minimise disruption would be put in place if planning permission were granted, Mr Hyde told them.

He acknowledged that the retrospective nature of this application had been unfortunate, but denied that there had been any breach of good faith. 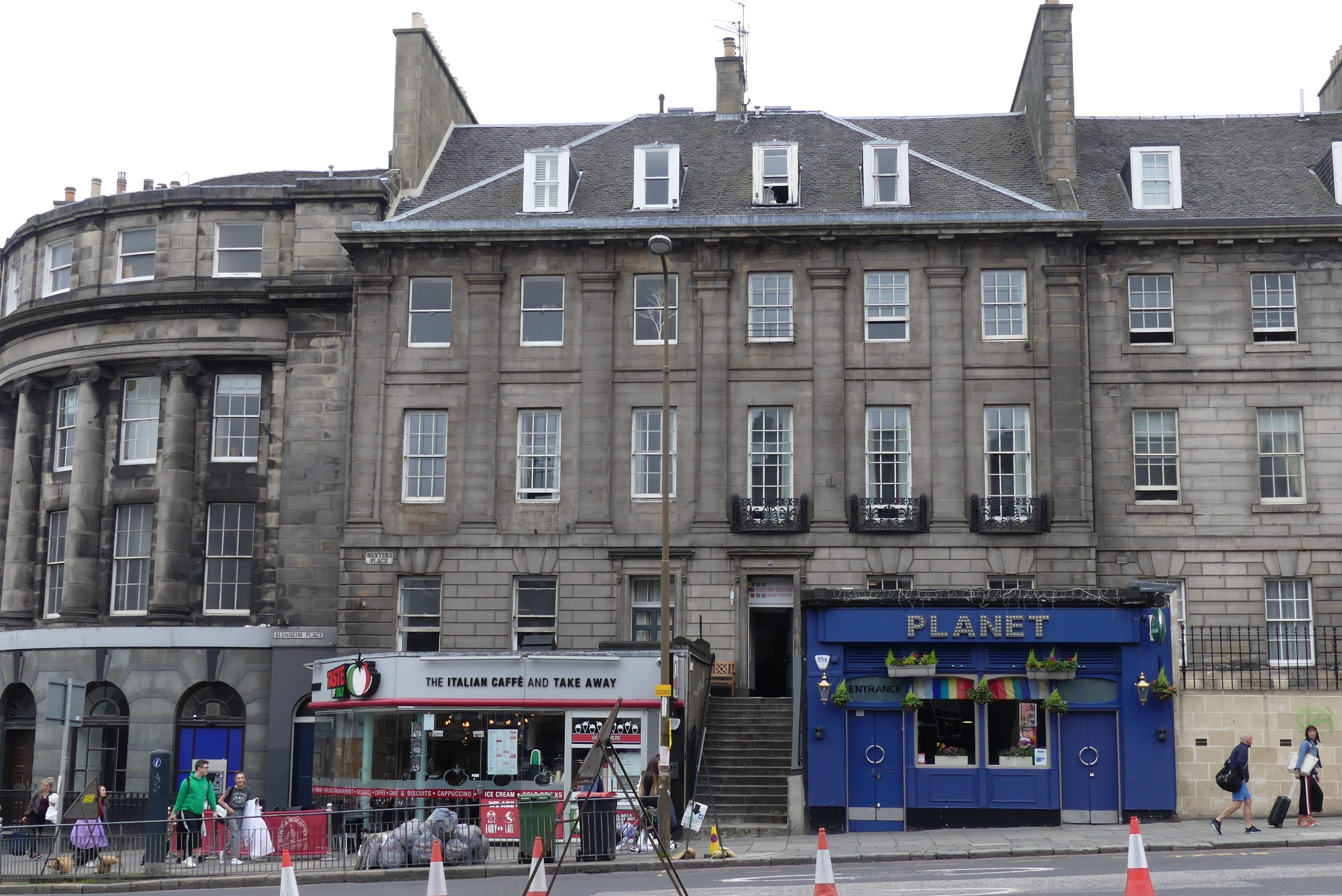 COUNCILLORS DECIDE ON GROUNDS FOR REJECTION

Planning Convener Cllr Neill Gardiner, realising that Subommittee members were not minded to agree the proposal, called for clear grounds of objection that would withstand any subsequent appeal. Residents feel under siege, he said. The city centre must remain a place to live.

Members agreed that 7–8 Baxter’s Place is indeed suitable for residential use, and already has planning permission as such. It would be ‘perverse’ to grant permission for alternative use when there was already compelling evidence of the short-term lets’ detrimental impacts.

The building is not suitable for commercial uses of this kind given its material construction and layout, and the number and proximity of residents.

The crucial issue is negative impact on amenity. Contrary to the Planning Officer’s assertion, Policy HOU 7 and DES 5 (Paragraph A) do apply here.

The reason for refusal was settled as:

‘The use as a class 7 hostel would be contrary to Policies HOU 7 and DES 5a in that it would have a detrimental impact on the amenity of adjoining residents by virtue of noise and disturbance caused by the operations associated with the use.’

In addition, the Subommittee instructed officers to resume Enforcement, and apply a range of appropriate measures.

Spurtle welcomes the Development Mangement Subcommittee's decision. It gets to grip with an intolerable situation specific to residents at this site, and offers hope to others facing similar problems elsewhere. What's more, it makes an unmistakeable statement that the Council is serious about protecting and enhancing residential uses as a vital component of life in this unique city centre.

A podcast of the hearing is available to watch online HERE starting at 14 minutes.

UPDATE: 7.00PM: Since posting this article, Spurtle has been suffering occasional dizzy fits and the sense that perhaps we hadn't fully understood all the ins and outs of class uses. We therefore threw ourselves at the mercy of New Town & Broughton Community Council's Planning Convener, Richard Price, who kindly  offered the following tentative explanation.

'I think that if the proposed use falls under a specified class, then it isn't sui Generis use. The applicant here were applying for a class 7 use, which includes hotels, guest houses, and hostels. It's inferred (by Cllr Mowat and Michael Hyde) that for class 7 hostel use, a permanent reception facility is required. If there were no reception provided then Mike Hyde (and Cllr Mowat) indicated that it would not conform to class 7 use and would then become a sui generic serviced apartment use (which would require a further planning application). He propounded this as a form of guarantee that as Cornerstone are applying currently for class 7, then they would need to maintain the reception area, otherwise, with no reception area, they would again be in breach of class 7 usage.

'What confuses this whole argument is that under the class use, class 9 (which everyone agrees is the current permitted use for the building) only applies to residential houses, and residential flats are again a sui generis use. It just demonstrates the inadequacy of the current class use definitions – especially regarding premises such as is being proposed.' 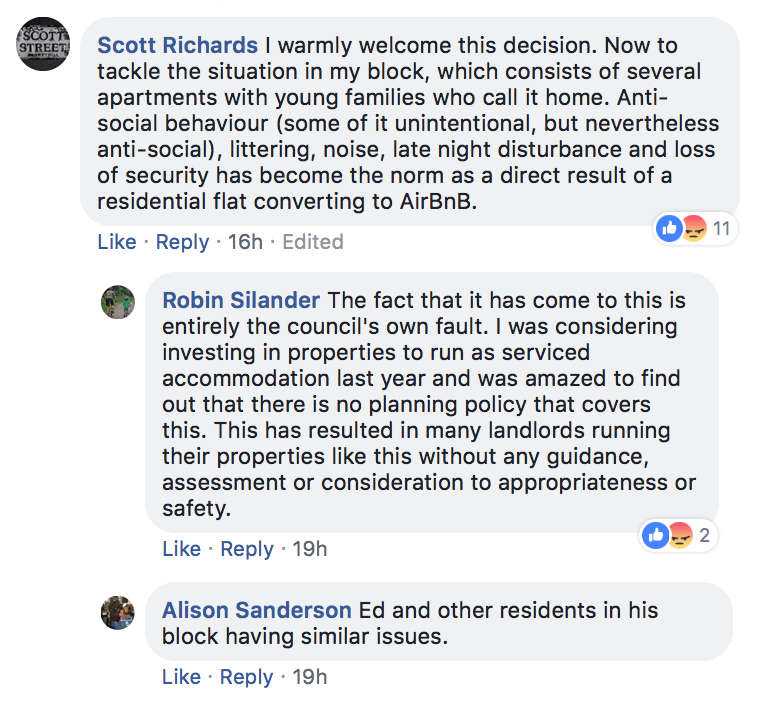 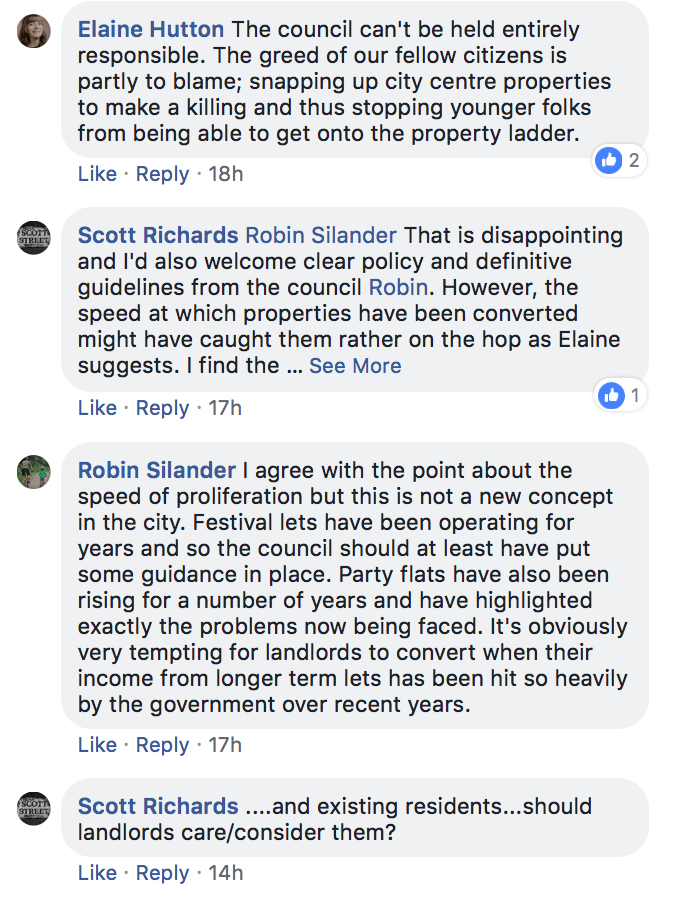 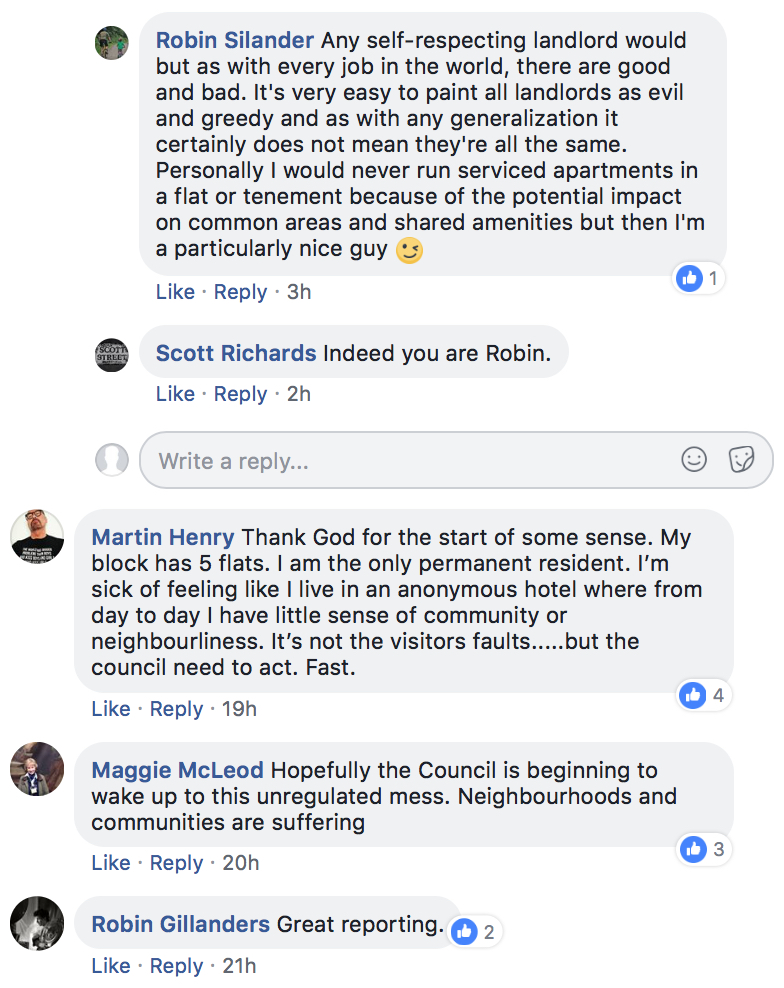 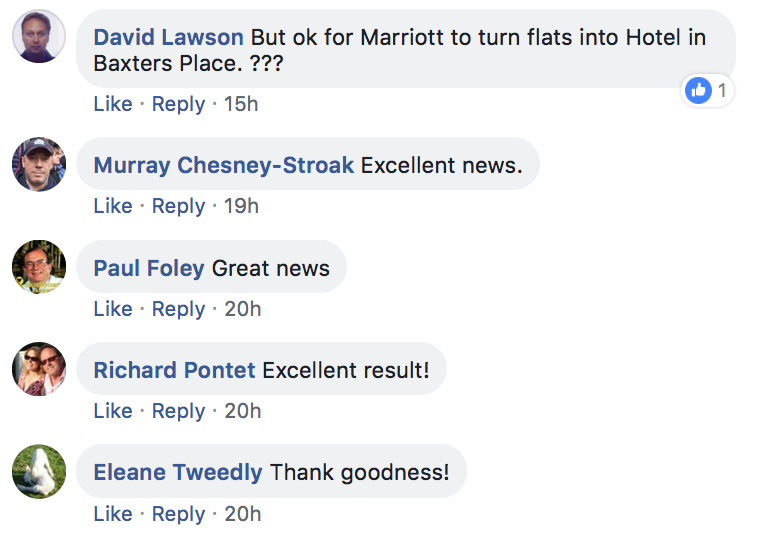