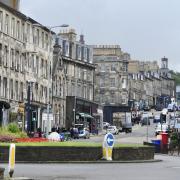 The Council has been keen in recent days on making conditions in Edinburgh as safe and attractive as possible for pedestrians and cyclists.

We need effective routes soon that will encourage more people to travel actively at a sensible social distance from each other and four-wheeled fellow road users, relieving pressure on public transport.

To this end, there have been appeals to the public for local input on which changes where could make the most difference. 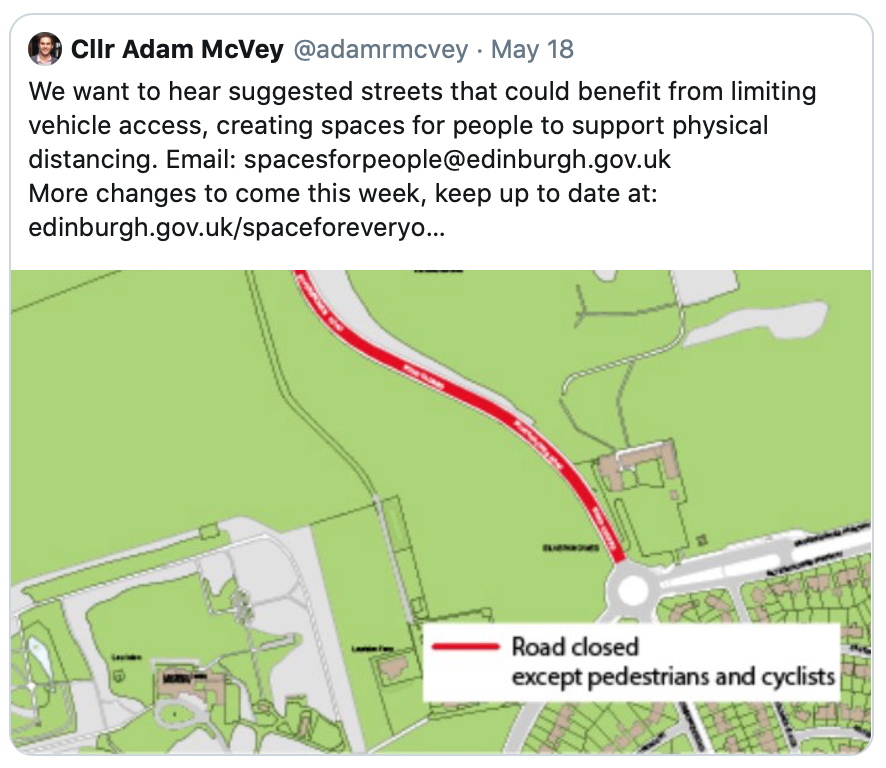 We reproduce his letter below in full.

I am writing in response to the invitation issued by the City Council for suggestions from the community for further spaces for walking and cycling.

Broughton Street has quite narrow pavements, particularly on the eastern side. It is an important pedestrian route into the city centre for many in the north of the city, and is also regularly used by cyclists.

It is very difficult to maintain social distancing on the pavements, and the ability of pedestrians to walk on the road will obviously be less when streets become busier.

To resolve this problem, I would therefore propose that, on the eastern side of Broughton Street, the current parking bays are removed and a cycle lane put in its place, for the entire length from East London Street to Picardy Place. This lane should be given light segregation, with occasional gaps for the two bus stops, and loading at two or three locations. Light segregation, such as low pre-formed plastic objects, would also allow emergency vehicles to access the kerb if necessary. They could also be put in place very quickly.

Doing this would provide pedestrians with a space they could walk into if they wished to ensure social distancing on the pavement, as they could go into the cycle lane for a short while. As Broughton Street is uphill, cyclists will not be moving fast and this will not be a safety problem for either. Putting a cycle lane in place will assist cyclists who may be less stable when cycling up the hill, and this will mean this route will be usable by more cyclists.

I am suggesting that this lane is placed on the eastern side as the pavements on the western side are wider in some parts anyway, and in addition a cycle lane going downhill is of less value to cyclists.

I realise there may be some objections from those who feel removal of the parking bays would have a negative impact on shops in the street. I suggest that, in fact, the arrangement suggested above, by reducing pedestrian crowding, will actually mean it is more likely that they use Broughton Street for shopping. In addition, it will give some space for people to wait outside shops while waiting to go in, if there are too many people in a shop because of social distancing rules.

I do hope you will be able to implement this measure as soon as possible.  As well as being simple and easy to do quickly, it would also be very cheap to do.

I have copied this email to the council email address for making suggestions of this nature. I have also copied it to the Broughton Spurtle for their interest.

So far Mr Lazarowicz has received replies from Councillors Doran and Mowat, both of whom had already been discussing a similar proposal. Councillor Munn welcomed the intervention, and noted similarities to another narrow shopping street he is addressing: Easter Road.

Lazarowicz has also posted on Twitter. You can either respond there or at spurtle@hotmail.co.uk. We’re interested to hear your views.

Since his original communication on the subject of Broughton Street, Mr Lazarowicz has refined his proposal in an email to the New Town & Broughton Community Council. That email is reproduced below.

You have invited the public to express view on my proposals for temporary traffic measures in Broughton Street which you discussed at your last meeting.

I know that a concern raised by a number of people was whether it was desirable for the proposed extra lane to be used as a pavement overflow for pedestrians as well as for cycles. In the light of that concern, and other comments, I would like to make the following amended proposal which meets those concerns, and I think is also compatible with the recommendations for temporary provision where space is limited.

I would emphasise, as I did before, that this is a proposal for an immediate and temporary scheme which improves the opportunity for social distancing and for a safer road for cyclists and pedestrians. I would hope that separate consideration and consultation could be given to more extensive changes in the future.

In essence, I propose a segregated lane which is itself divide into cycle and pedestrian sections. It would be separated off by plastic wands, or similar, on the road side, and within the lane, the cycle and pedestrian sides would be divided by painted line markings only. My proposal also provides wider space for both cyclists and pedestrians for the stretch closest to the junction with Picardy Place.

The detailed proposal is as follows:

2. The inside lane from Broughton Street Lane to Picardy Place should also be segregated from the main carriageway.

3. Within those segregated areas, there should be two lanes, marked off by painted lane markings only: the outside one for cycles, and the inside ones for pedestrians.

4. The available width suggests that it would be possible to divide the segregated lane, in the northern section, to provide approx. 1.5 m width for cyclists, and 1 m for pedestrians. In the southern section, approaching the junction with Picardy Place, the road width should be able to provide approaching 1.5 m width for both cyclists and pedestrians.

6. Rubberised speed cushions should be installed on Broughton Street at appropriate times to discourage speeding.

I believe these are practical proposals which meet concerns raised, and could be implemented very quickly. I do hope that you can give them, or similar measures, your support. 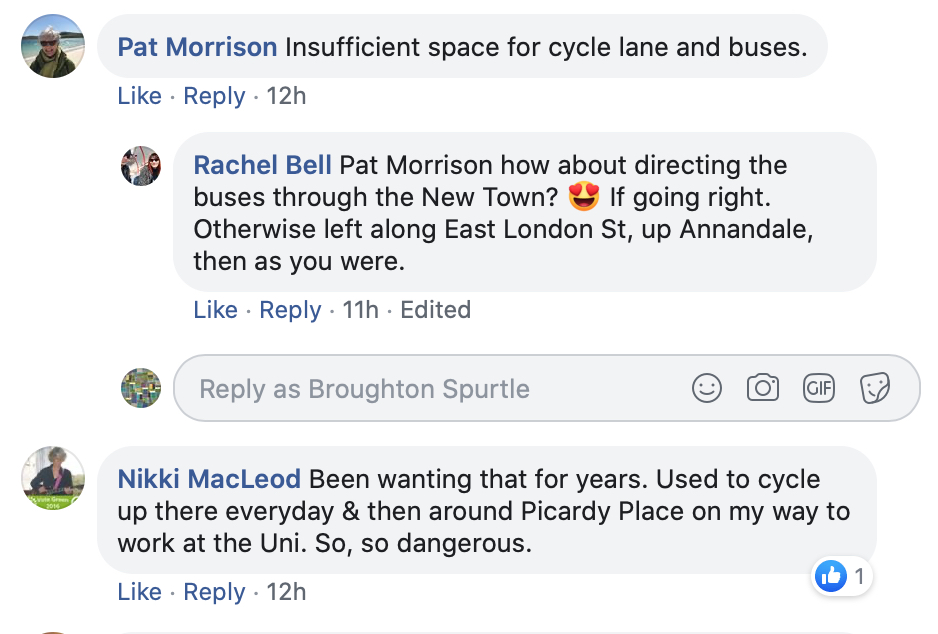 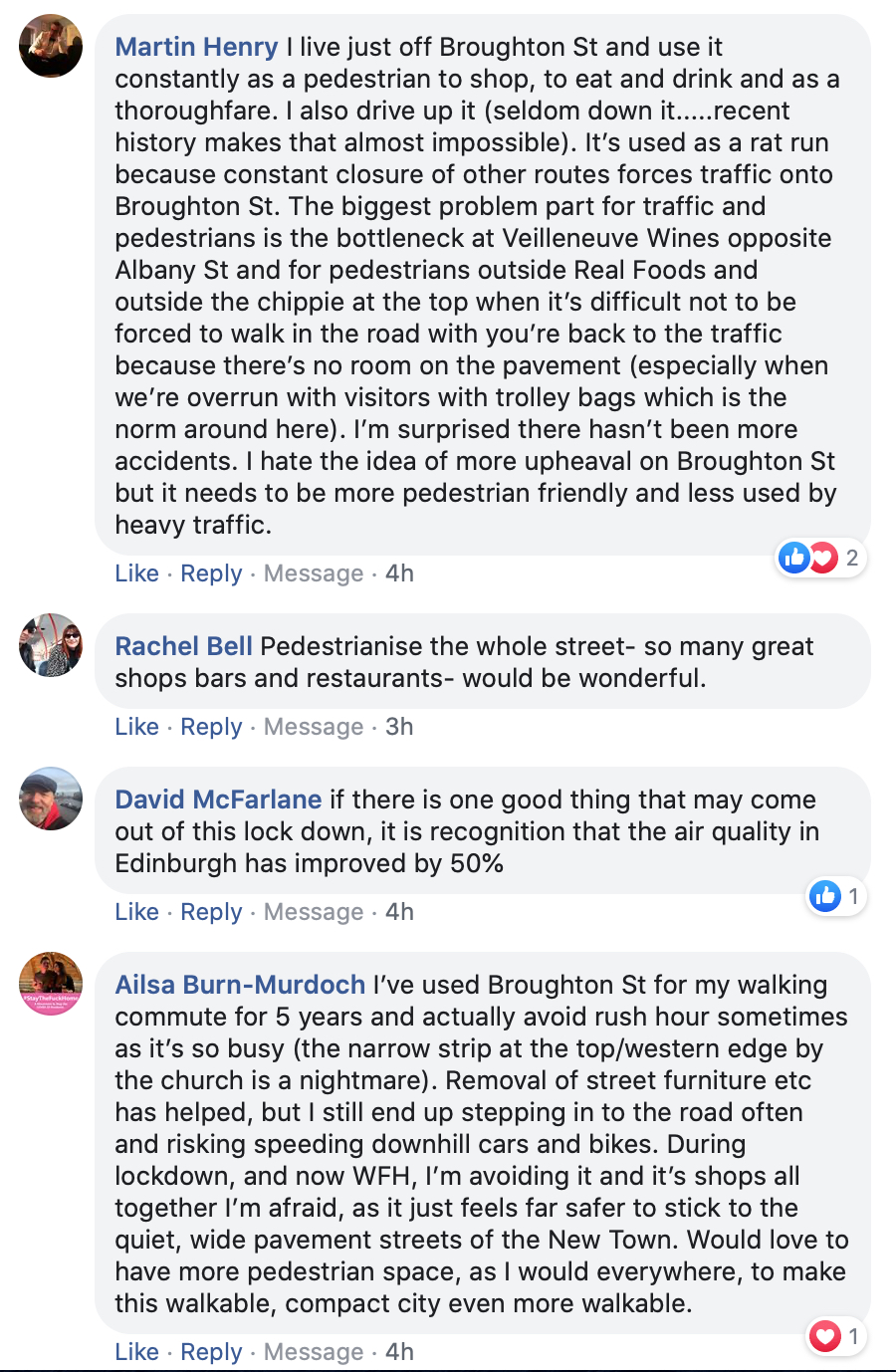 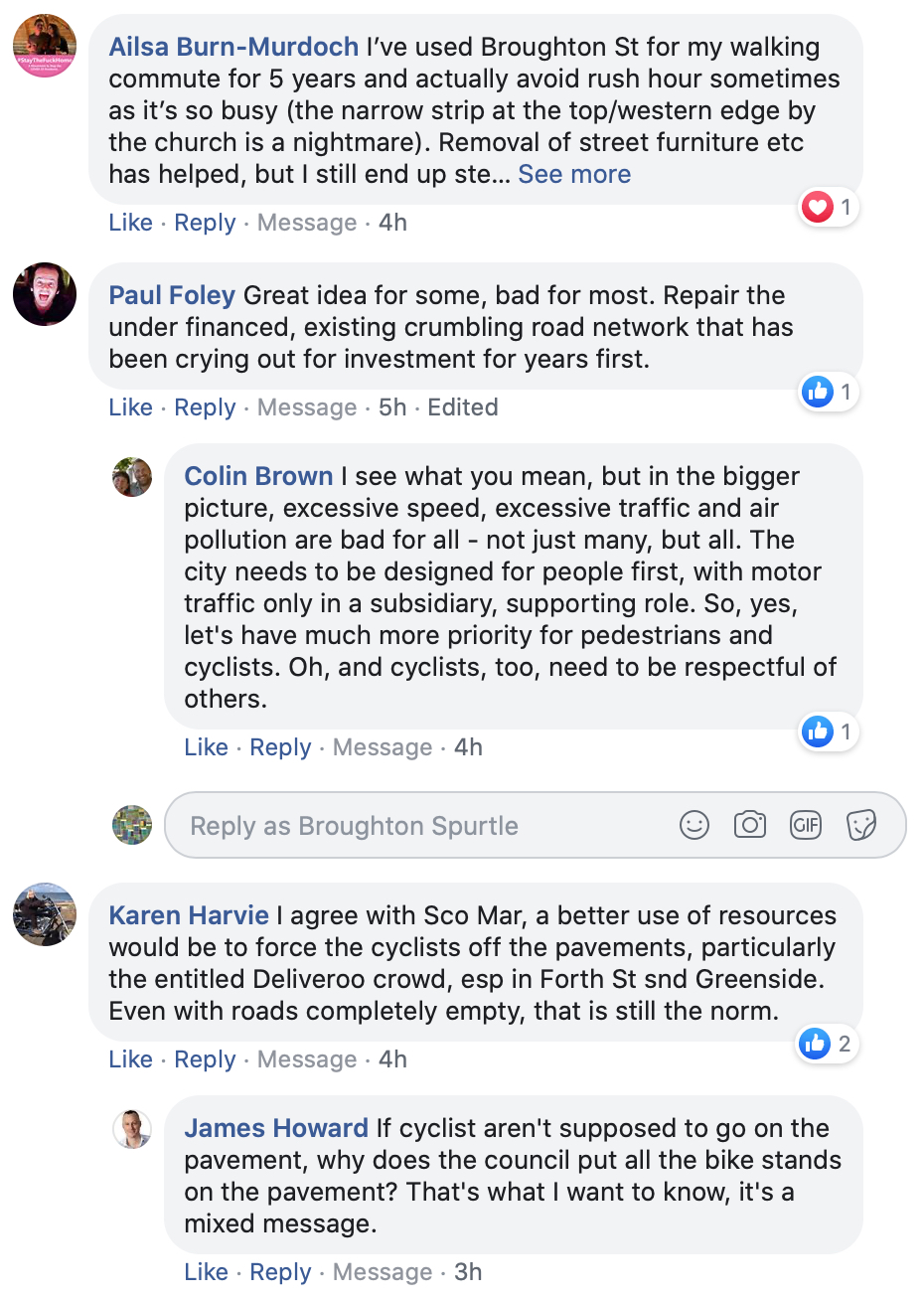 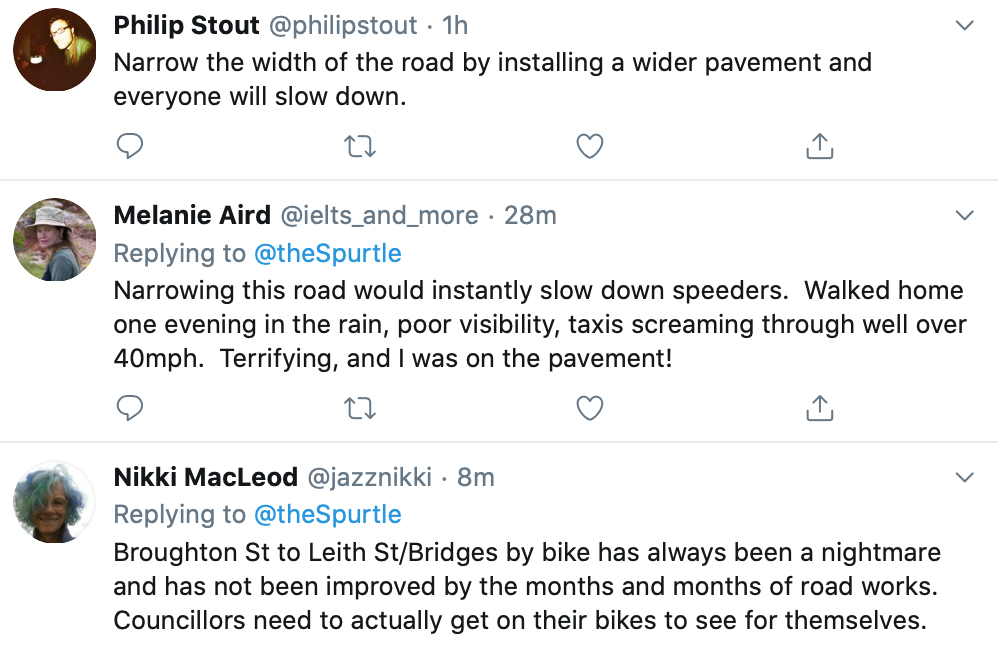 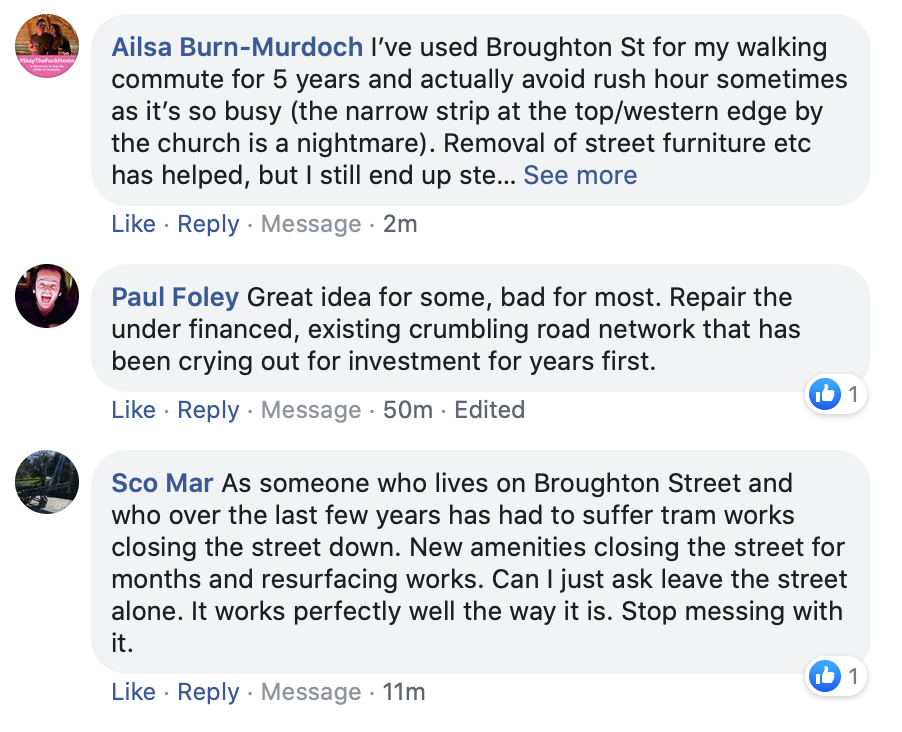 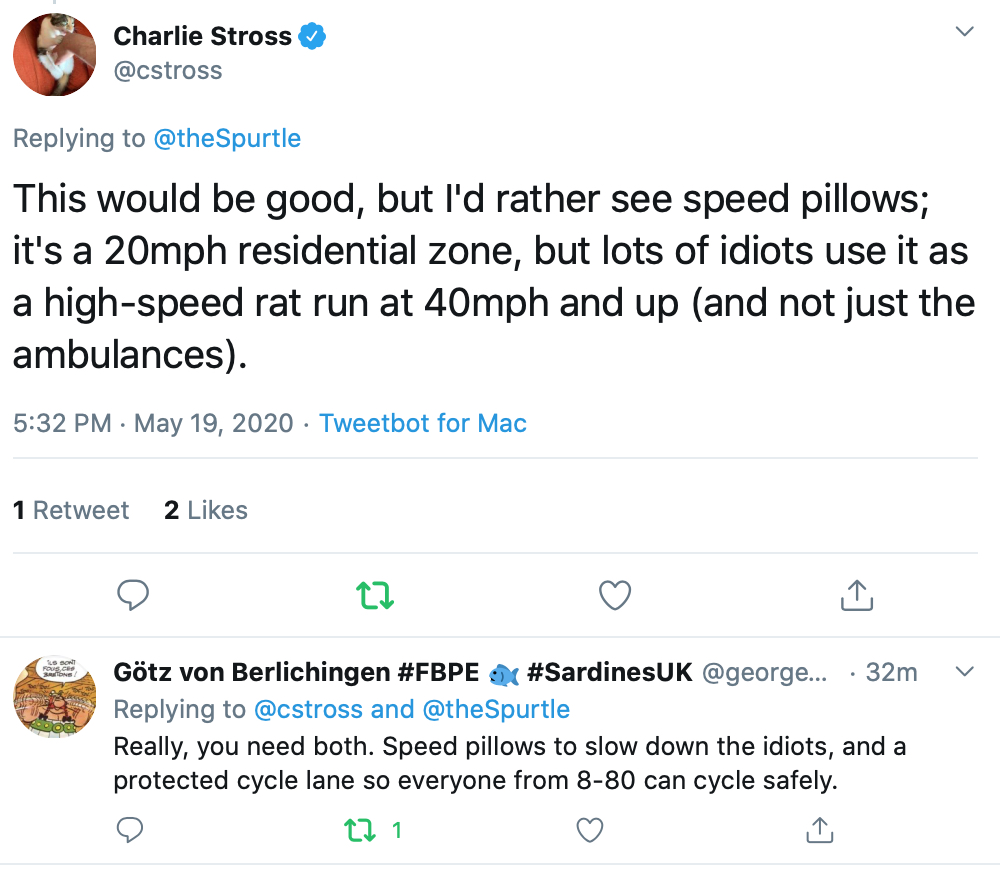