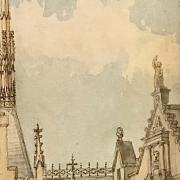 From time to time, the Spurtle receives unexpected letters from readers which raise the spirits and make us whoop for joy.

So it was that, last month, local resident Mr Eric Robertson sent us a photo of this superb watercolour which he thought might be of interest to us.

Long-term readers will know that I have frequently highlighted the significance of the ‘Broughton Boy’ sculpture originally sited atop the former George Heriot’s School building at 32 Broughton Street.

I have often appealed for his reinstatement from his current placement above the Crown Office in Chambers Street (see Issue 287), but also for images of him in situ in Broughton Street. The latter was to no avail despite exhaustive searches, and the boy seemed to assume an almost mythic aspect. Until now!

Here he is in his original splendour at last, as correctly surmised, at the top of the Heriot School building.

The watercolour of the school and the neighbouring St Mary’s Free Church is the work of William Gawin Herdman (1805–82). He was a self-taught artist who gained considerable renown for prolific paintings of his native Liverpool. He exhibited at the Royal Academy from 1834–61, and was noted as a realist painter often at odds with his pre-Raphaelite contemporaries.

Happily for us, he also worked in Edinburgh around mid-century, and we will return to some of his other works soon.

In this very detailed watercolour of 1862, Herdman’s depiction of St Mary’s Free Church is equally striking (see Issue 188), and together with the interlinked shops* it provides us with a fascinating record of how Broughton Street once looked.

I particularly like the lady in the marvellous, crimson, fur-lined cloak hurrying up the hill – possibly to church with her reluctant child.

The architecture of Edinburgh remains full of great riches, but also great ‘what ifs?’ Imagine Broughton Street de nos jours but still adorned with the triumphs of St Mary’s Free Church and Heriot’s ‘Broughton Boy’! I am profoundly grateful to Mr Robertson for giving us permission to reproduce this rare and wonderful work­.—John Ross Maclean

* Working downhill from the church, the businesses depicted are: James Anderson, bookseller (No. 26); Alex Bayne, tailor (No. 28); John Parker, cabinetmaker (No. 30), and George Bayne, fruiterer (No. 32). Details appear in the Edinburgh & Leith Post Office Directory of 1862–63.

Interestingly, all the properties remained until the 1980s, except for the flattening of their roofs (go here for a photograph), but the Broughton Newsagency and Vino seem to be the only survivors now.—AM