THE GHOST OF BROUGHTON HALL 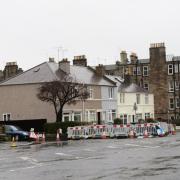 ‘It is a truth universally acknowledged, that a single street in possession of a good hole, must be in want of an interested observer … usually male, wearing a flat cap and unlikely to see 25 again any time soon.’

These are the exact words Jane Austen would have used had she been on West Annandale Street this morning, where a most interesting pit at the junction with Bellevue Gardens was exciting one of the Spurtle team in the rain.

He reports that within the hole – helpfully excavated by Scottish Network Gas as part of scheduled pipe replacement – lies the usual infrastructure one expects to see about three feet below the surface of a road.

But nearby are also a number of rocks quiet alien to the mud and sandstone locals normally find dissolving under their foundations every time a water main bursts. 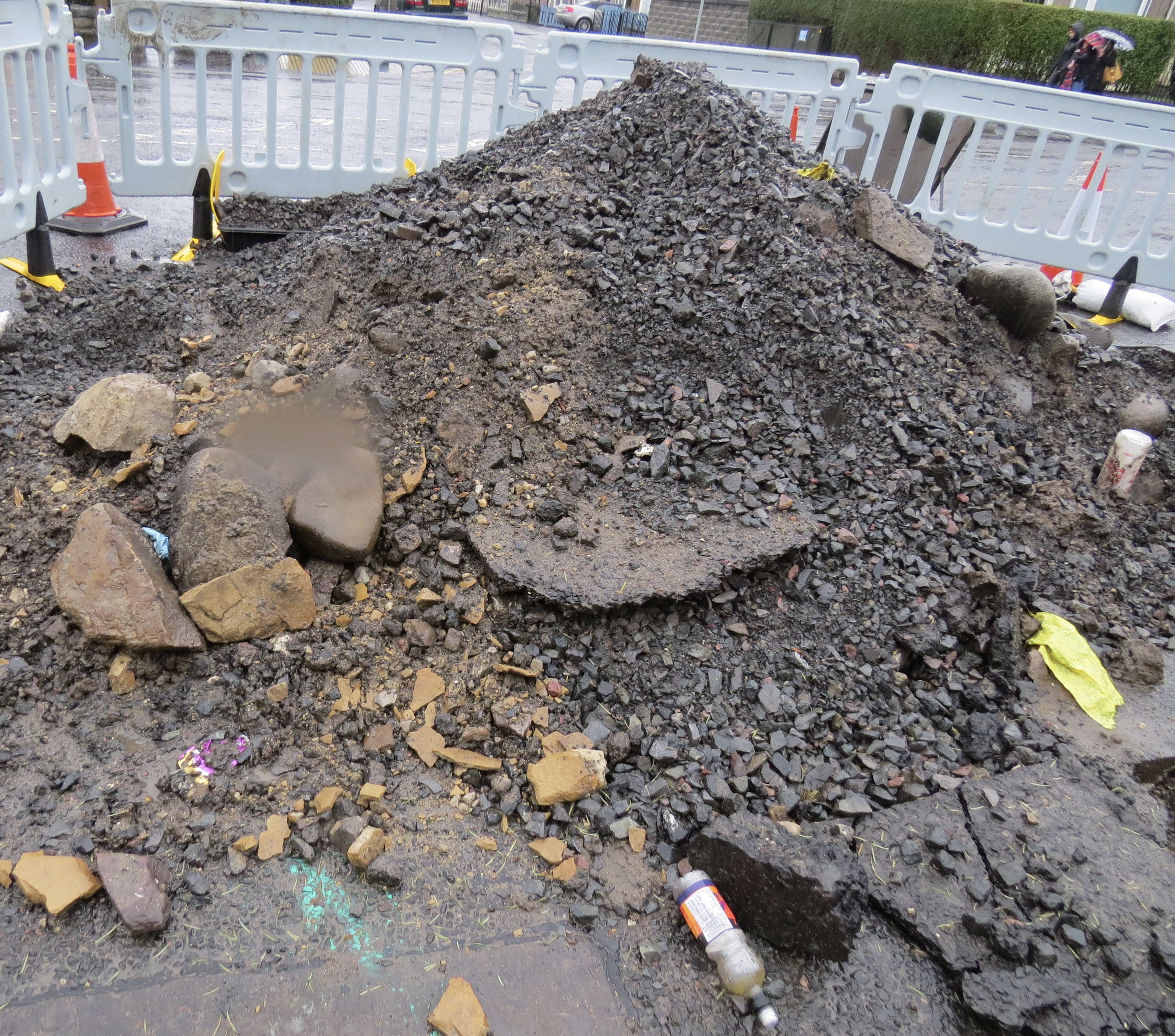 These large imports come from elsewhere, and are almost certainly survivors of the wall which once separated the old Royal Zoological Gardens here from the former policies of Broughton Hall (running down from left to right at the bottom of the map below). 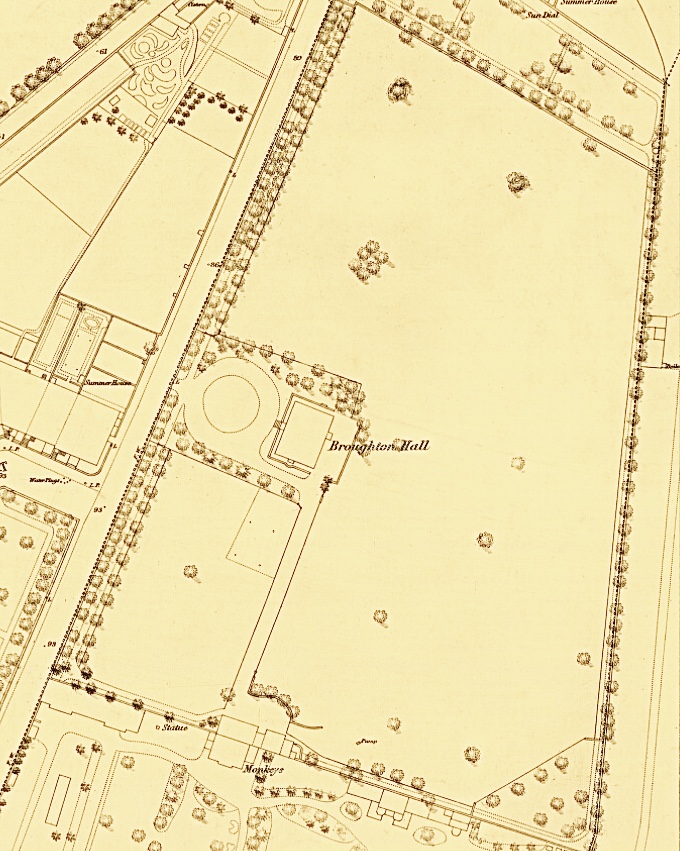 Broughton Hall was home to Archibald Stewart (Lord Provost in 1745), and later to William Fullerton (Comptroller of Taxes in Leith), and later to the printer, publisher and cut-price bookseller Alexander Donaldson between his retirement there in 1789 and his death in 1794. His son James – sometime publisher of the Edinburgh Advertiser – died in the house in 1830, leaving much of his fortune to establish Donaldson’s Hospital for 200 boys and 200 girls. 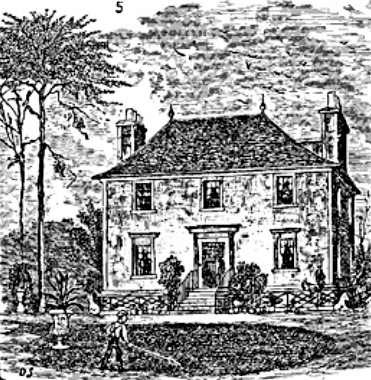 A fascinating and peculiar account of family life here in the 1870s, and an apparition in the garden, appear in ‘The Ghost of Broughton Hall’, Chapter 2 of theosophist Violet Tweedale’s Ghosts I Have Seen and Other Psychic Experiences (New York, 1919; available online in Google Books). Tweedale was the daughter of Robert Chambers, and lived as a girl in Claremont Crescent.

Maps suggest the building was demolished at some point between 1894 and 1905.

James Grant, in Old and New Edinburgh (1880), writes of the neighbouring zoo:

Where now Claremont Terrace and Bellevue Street are erected in Broughton Park, there existed, between 1840 and 1867, the Zoological Gardens (a small imitation of the old Vauxhall Gardens in London), where the strorming of Lucknow and other such scenes of the Indian mutiny used to be nightly represented, the combatants being parties of soldiers from the Castle, the fortifications and so forth being illuminated transparencies. Unfortunately or otherwise the gardens proved a failure. Among the last animals here were two magnificent tigers, sent from India by the then Governor-General, the Marquis of Dalhousie, and afterwards, we believe, transmitted to the Zoological Gardens in London.

Here, too, was Wood’s Victoria Hall, a large timber-built edifice for musical entertainments, which was open till about 1857. 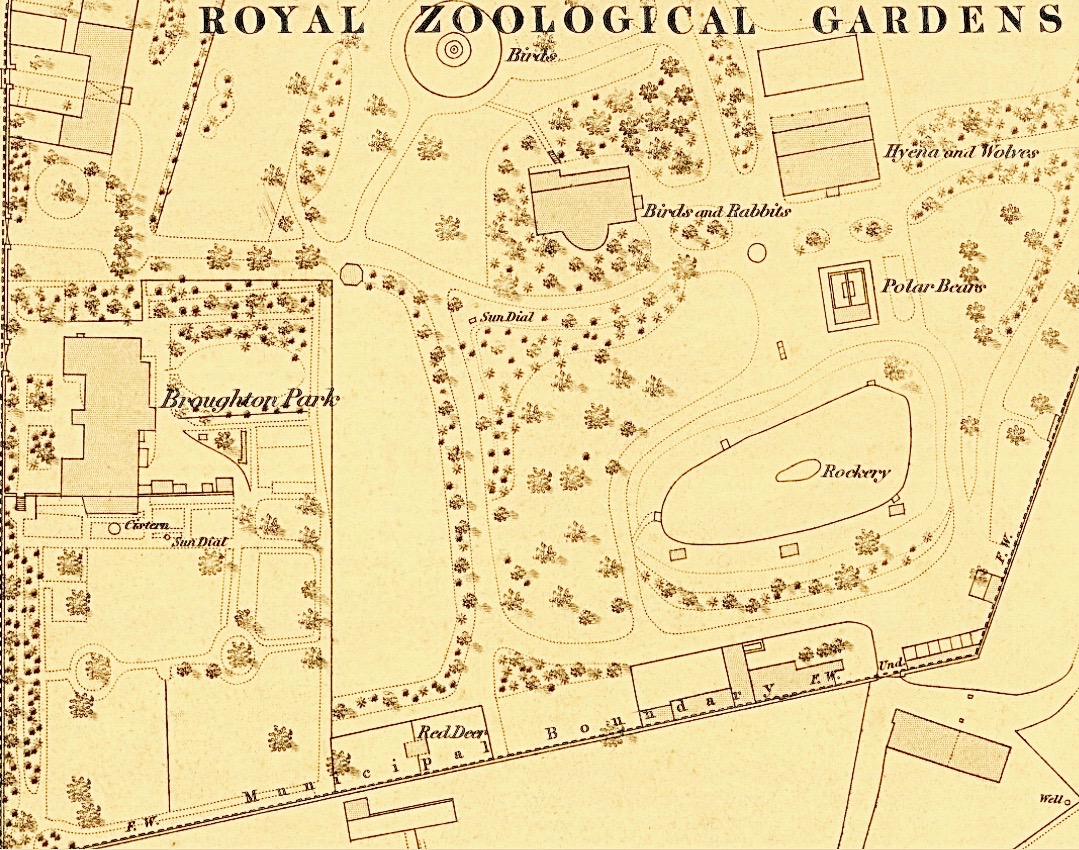 Within living memory, a resident of West Annandale Street, who had decided to replace the poor soil in his front garden, was surprised to discover a large number of monkey bones in the ground. Other sources than Grant suggest that these creatures in particular fared poorly in Broughton’s climate, many succumbing to tuberculosis, others dropping dead during the noisy battle re-enactments.

Two original guidebooks to the zoo ('The Visiters' Companion to the Zoological Gardens with numerous illustrations', dated 1842 and 1845 according to the catalogue) can be viewed in Edinburgh’s Central Library, and – as part of an entry on the orangutan – include a curt dismissal of the thought that Man and Ape could be related. This, seemingly, 14 years at least before publication of Darwin's On the Origin of Species.

Rachel Bell Fascinating. Would love to see the old and new maps overlaid.

Broughton Spurtle It's not ideal, but try Googling <Edinburgh Council Atlas> then flip between basemaps for 1850s and present day.

Fergus Smith Not overlaid, but side by side:

Broughton Spurtle Ooh, nifty! Thanks. The old map dates from after the zoo's closure, but is still very useful for verifying property boundaries.

Fergus Smith You can use the dropdowns to change the left/right maps, and zoom in/out to move to different locations. The NLS map site is a fantastic resource, I use it regularly for our family-history business ...

David Sterratt Interesting - love the side-by-side maps. It makes me wonder if the 6ft wall that runs along the back greens in lower Bellevue Road is made with stone from the boundary wall of Broughton Hall - or perhaps even the hall itself. The tenements were built around 1908.