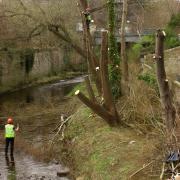 It looks like the end for these trees beside Canonmills Bridge, photographed this morning as contractors applied the coups de grace.

Malcolm Chisholm MSP has been in touch with the City of Edinburgh Council on Friday and again this morning, but holds out little hope.

A Council spokesperson told Spurtle this lunchtime that the last two trees scheduled for felling would come down today.

The Council also asserts that:

Councillor MacKenzie told us in a statement received at 2.50pm: 'The decision was taken in light of the detailed assessment of additional costs which will be incurred by the taxpayer, the over-riding need to get on with this work to protect homes and businesses and the considerable disruption and inconvenience works to retain the trees would have caused to residents of the properties concerned.

'The  project plans include putting additional funds into landscaping, tree planting and environmental works which will enhance the area for future generations.'

[img_assist|nid=2812|title=|desc=|link=node|align=right|width=249|height=640]Councillor MacKenzie did not respond to our questions – made through an intermediary – about how the matter had been handled and whether it gave members of the public time to respond adequately.

Campaigner Ani Rinchen Khandro responded 10 minutes later. She says that anyone who claims the current tree felling matches Dave Anderson's original scenario is clearly not in possession of the facts. 'As was stated in [his] email, aside from some very small saplings adjacent to the gable end of Howard Street, all the main trees at the Canonmills location were to be saved, apart from one sycamore and one willow that was to be pollarded. In fact they have all been hacked down, and this during the bird nesting season too!'

In a separate communication distributed to core supporters, she says: 'Strange that the Council cited extra costs to the taxpayer as the reason for reneging on an agreement that would have benefited the whole community, yet they are content to spend a substantial amount of taxpayer's money building an expensive walkway and steel window shutters to prevent flooding the one basement property that, despite being closest to the river, has been allowed a change of use from storage space to become residential.

'The owner/developer of this self same basement was permitted to put holes low down in the gable end of the building to install windows. In 2000, when the river was in spate, it poured through the holes before the windows could be installed and subsequently into the adjacent basements, an incident which was instrumental in creating a need for flood defence at this particular location.'

So, in brief, there are two contrasting ways of looking at this Canonmills catastrophe:

Whatever the ins and outs of the matter, it is has been another PR disaster for the Council. This matters beyond the future of the floodworks, since it seriously erodes confidence in the work of officials and elected representatives. One Spurtle reader – whose opinions are, sadly, now not uncommon – wrote to us today haranguing the City's record of 'incompetence and deviousness'.

'In fact,' he concluded, 'these days, if the Council issued a statement to the effect that 2+2 = 4, any sensible Edinburgh resident would want to have it independently verified'.