HEAVY RAIN – NEWS GETS CARRIED AWAY 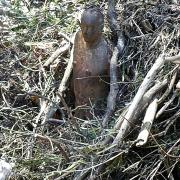 As rain fell on Monday, the Edinburgh Evening News reported breathlessly about ‘unbelievable scenes’ across the city.

There was particular coverage of ‘flash floods’ and traffic disruption to the west of the capital.

But staff were not averse to covering dramatic events elsewhere – like this from St Mark’s Park in Broughton. 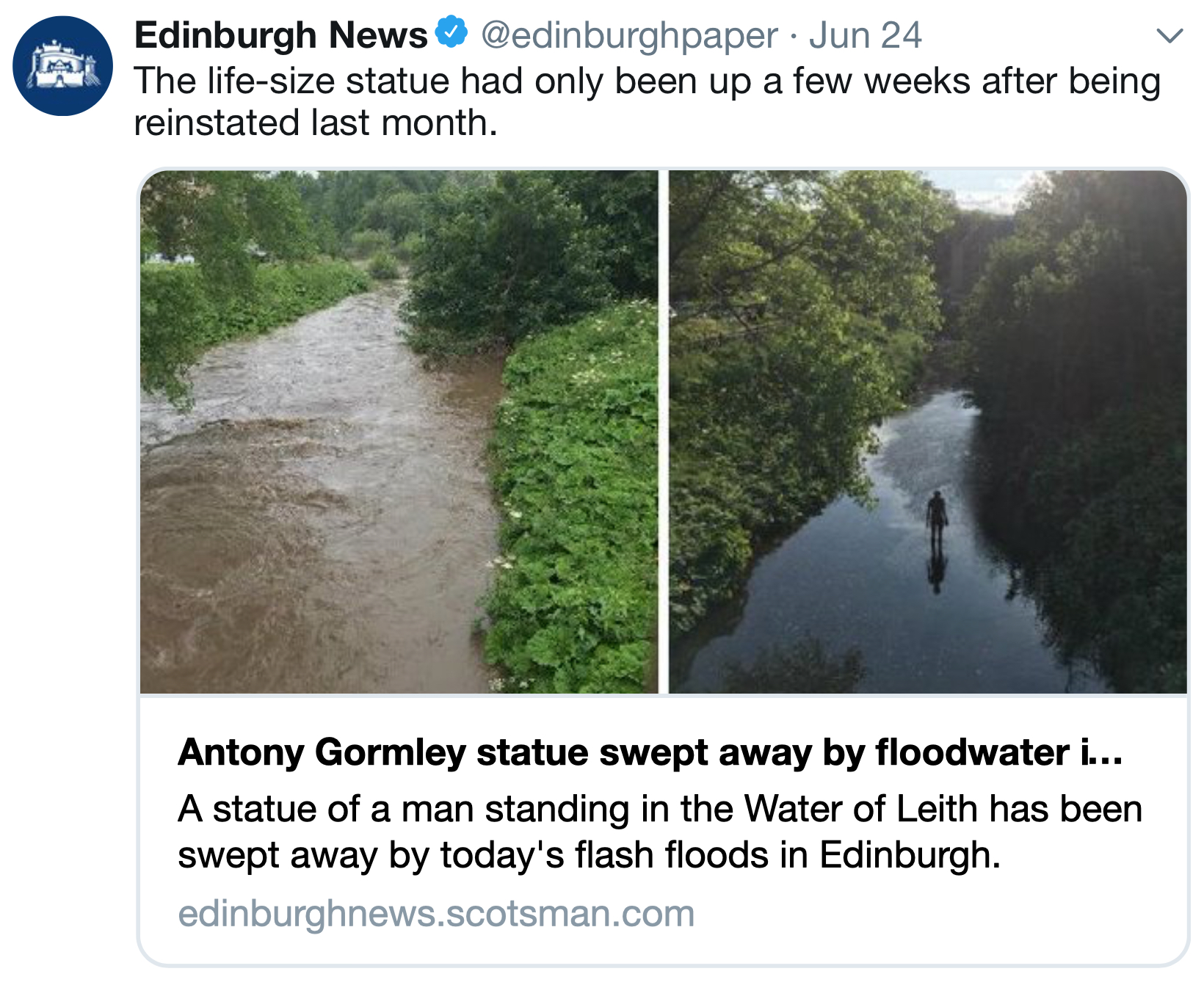 Then again in Tuesday’s printed edition. 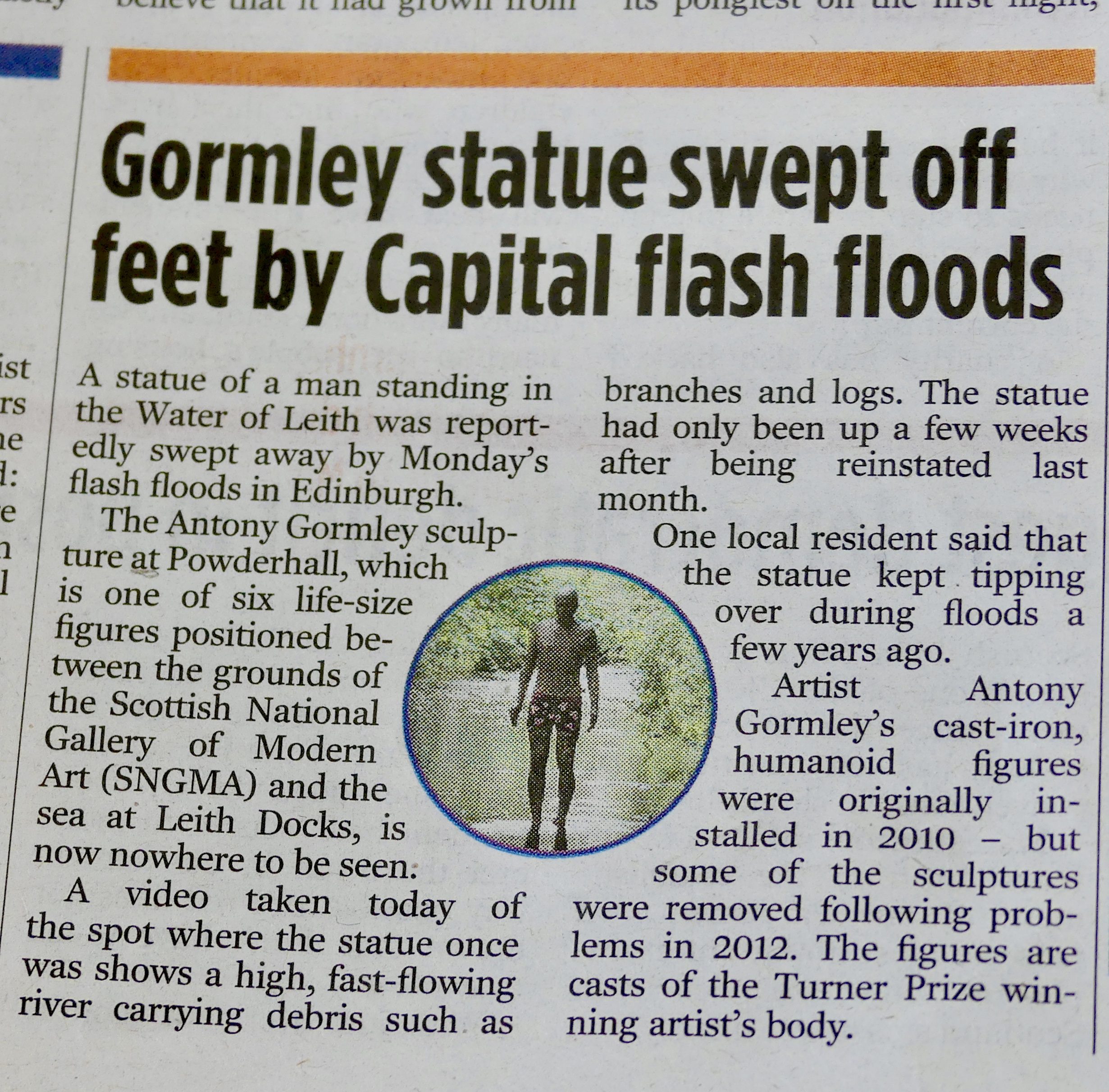 This morning, the Evening News corrected the errors, without mentioning where they had appeared in the first place.

There was also no reference to the photo used in Tuesday's paper, which had shown the Gormley situated in Stockbridge, not the one supposedly overturned downstream.

Feet firmly on the ground

In reality, of course, as most Spurtle readers realised all along, the three local Gormleys had never been as likely to get carried away as a journalist in Orchard Brae House.

Now permanently secured to extremely heavy and stable mounts, the figures are not for tipping.

As expected, once the waters subsided, the Stockbridge Gormley emerged like a Royal Marine in a disintegrating ghillie suit. 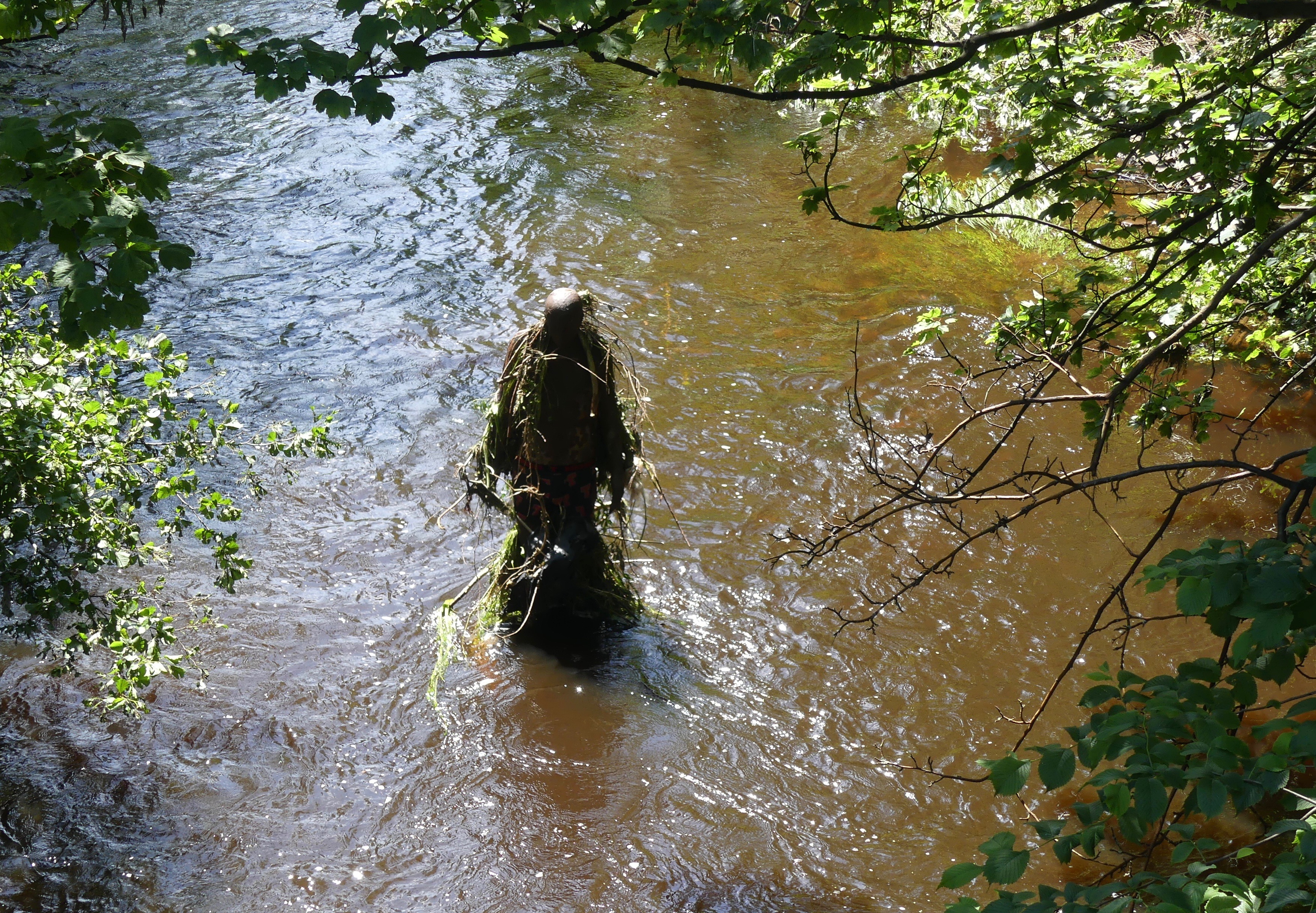 The supposedly ‘swept away’ Puddocky skinny-dipper had the hung-over mien of someone who’s just spent the night in a collapsed tent at Glastonbury. 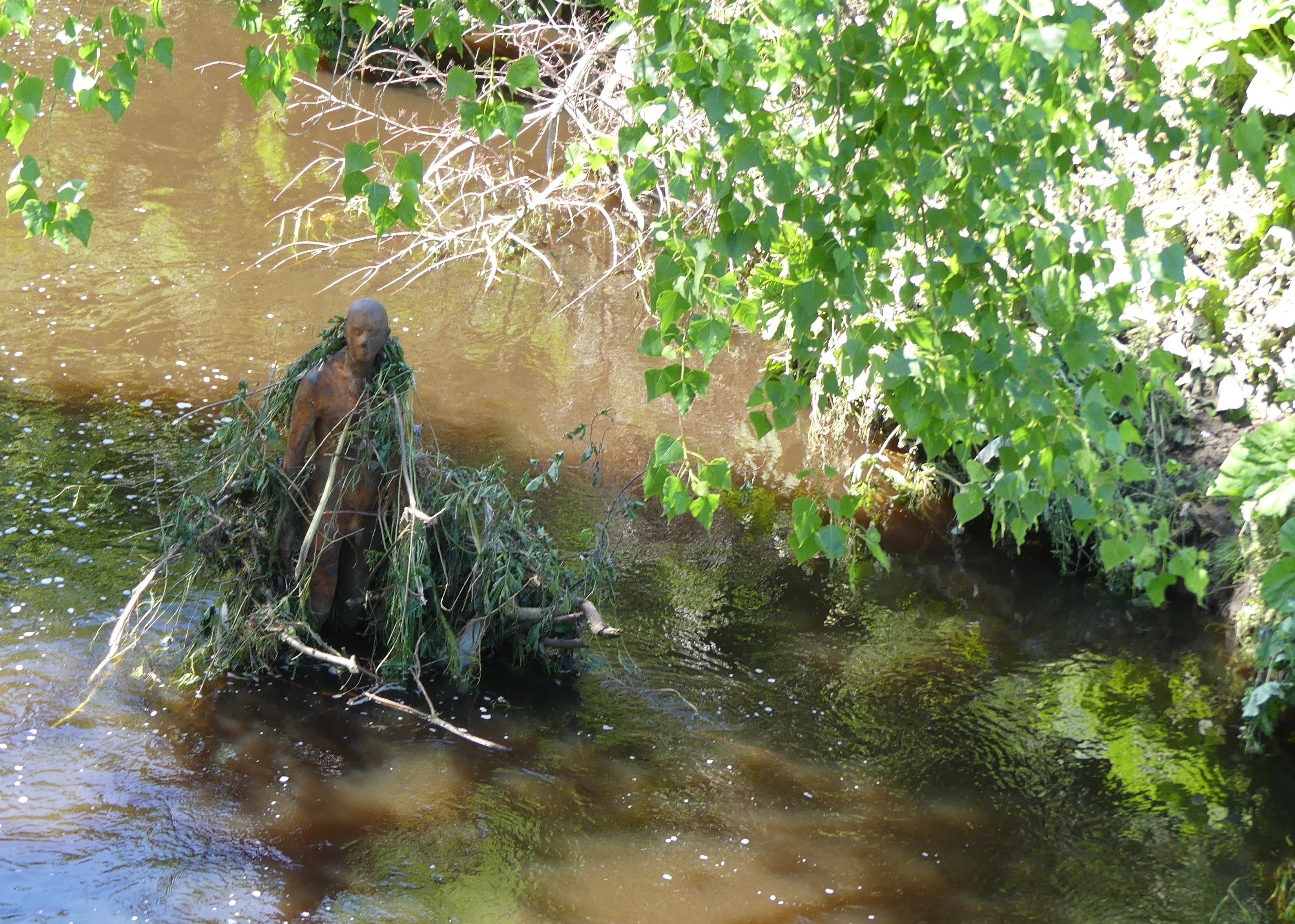 And in Bonnington, the beaver lodge described HERE earlier this month had expanded into a beaver block of flats. 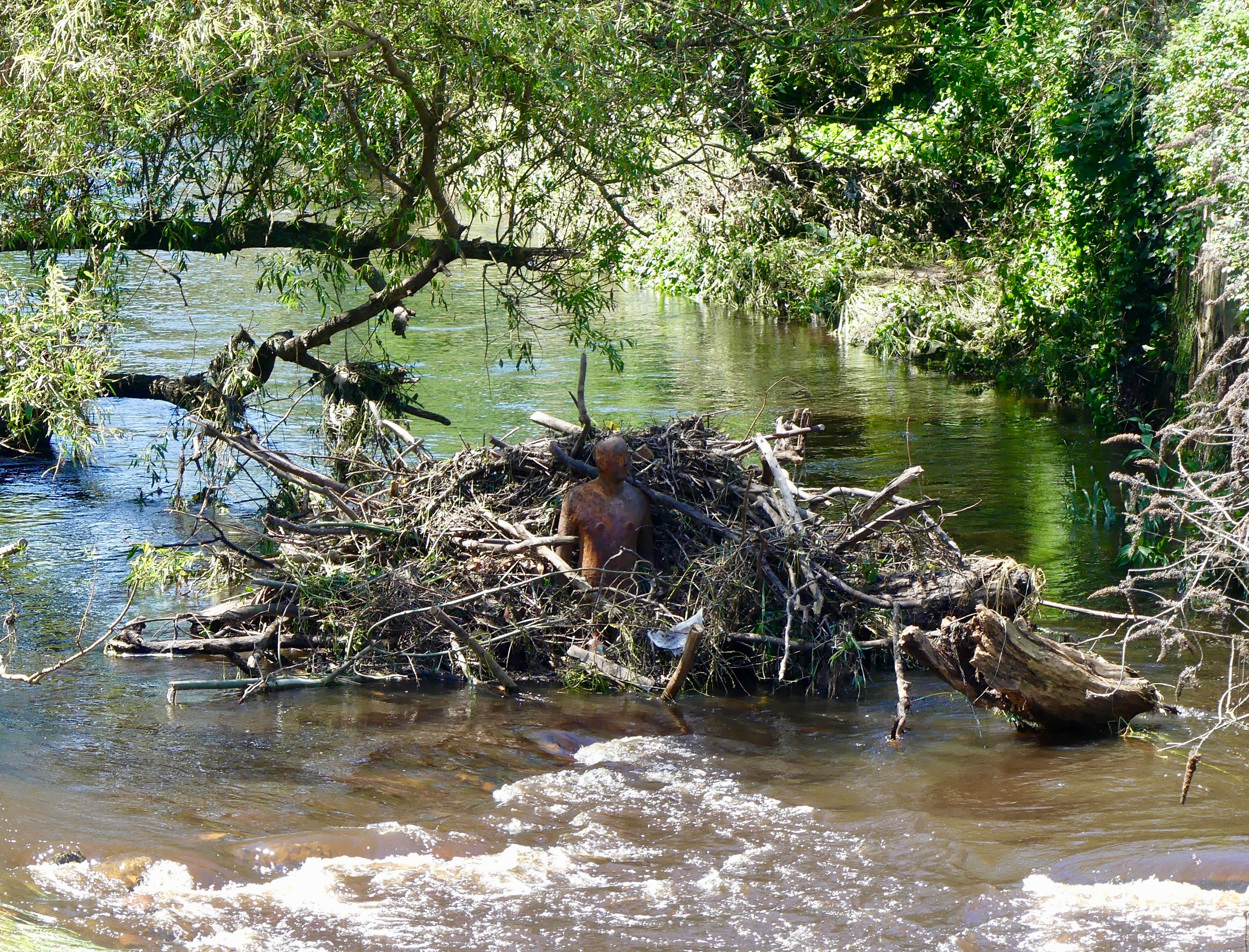 Close up, the tangled mass of debris is astonishing. 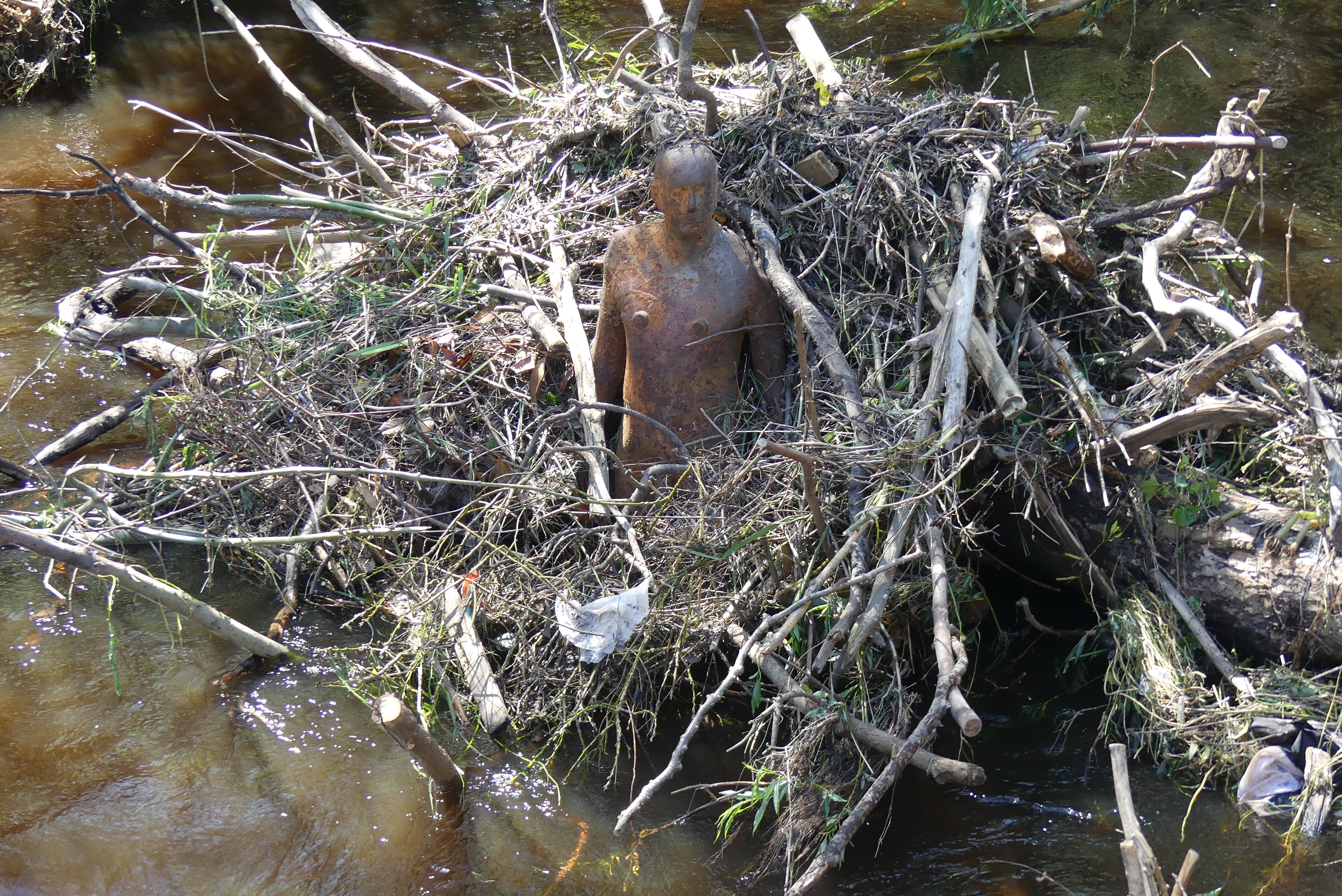 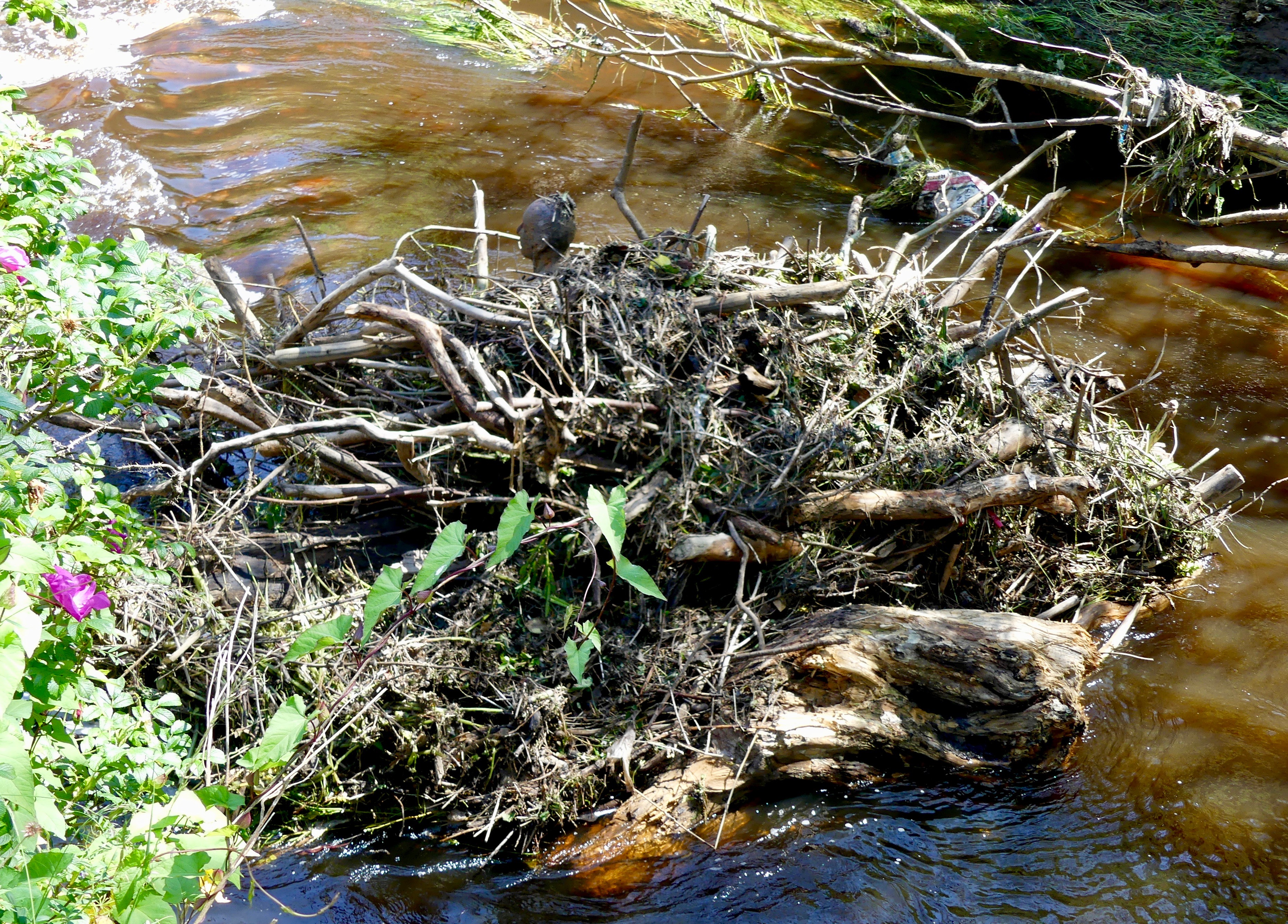 Spurtle readers will probably recall that the Gormleys formerly rested on a tipping mechanism that gave way when the water pressure (from the river in spate) grew too great. The idea was to avoid just such accumulations as these, and the associated risk of the river overflowing its banks.

Why these precautions were eventually abandoned, beyond the fact that they inconveniently kept working, we do not know. We shall return to these and similar issues soon.

News coverage – Will it wash?

In the meantime, though, Monday’s deluge gives rise to another serious consideration. Namely: Are ‘shared’ images and deskbound Evening News journalism to be trusted?

A little background knowledge, local research, or fact-checking on the ground would surely have sunk the swept-away-Gormley panic before it was published … twice. Seemingly, though, in all the excitement, time and tide waited for no-one.

Is this really the quality of community-based ‘factual storytelling’ Scotsman editor Frank O’Donnell asserted on 12 June would be preserved behind a JPIMedia online paywall?

Frankly, it reads a lot more like the increasingly ‘unregulated content and sometimes inaccurate news made available through social media’ which O’Donnell warned against elsewhere in the same letter to readers.

Alas, with the Evening News short of staff and marooned in the middle of nowhere on Queensferry Road, there are major obstacles to any improvement.

UPDATE (27 June 2019): Spurtle has been in touch with the Water of Leith Conservation Trust today. A spokesperson there confirmed that members of the gardening team at the National Galleries of Scotland will be clearing the Gormley figures later this week, when it is safe to do so and before wildlife moves into the trapped debris.

'They will pull the larger tree trunks to the side, where they will rot down and provide great habitat for fish and invertebrates. Any litter will be removed from the river and either recycled or put into landfill.

'Due to the situation of the statues, we do not see that the removal of the debris would be a risk to any of the surrounding wildlife.'

UPDATE (28 June 2019): A National Galleries of Scotland spokesperson clarifies: 'The National Galleries will use our existing contractors – who previously provided the same service when the figures were last in situ – to clear debris from around the Gormley figures in the Water of Leith. The river is still fast-flowing, so this will occur as soon as it is viably safe to do so, following the methodology of the risk assessment and what has been verbally agreed with the Water of Leith Trust. We do not yet have a final cost for this, which will obviously depend on the extent of work required.' 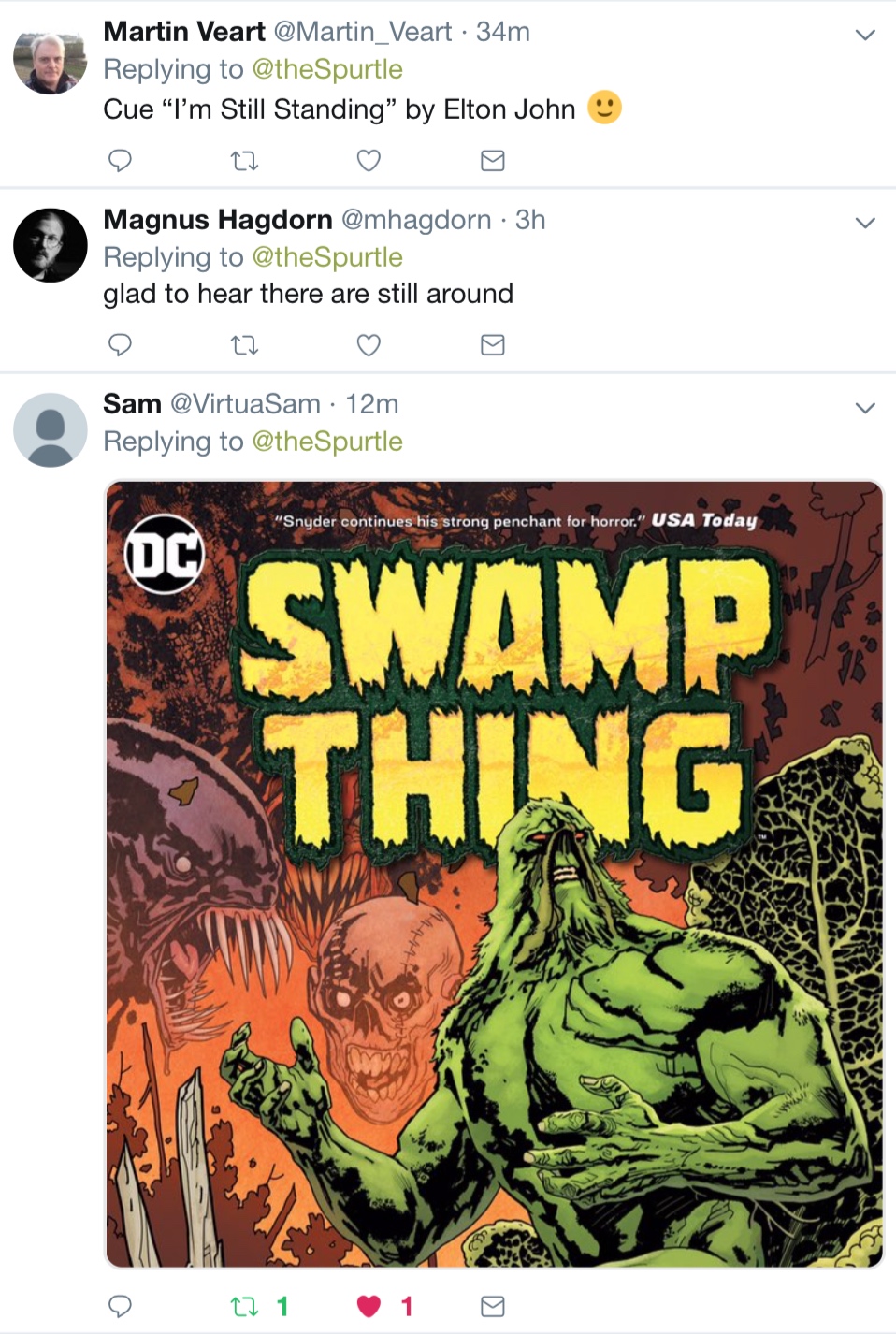 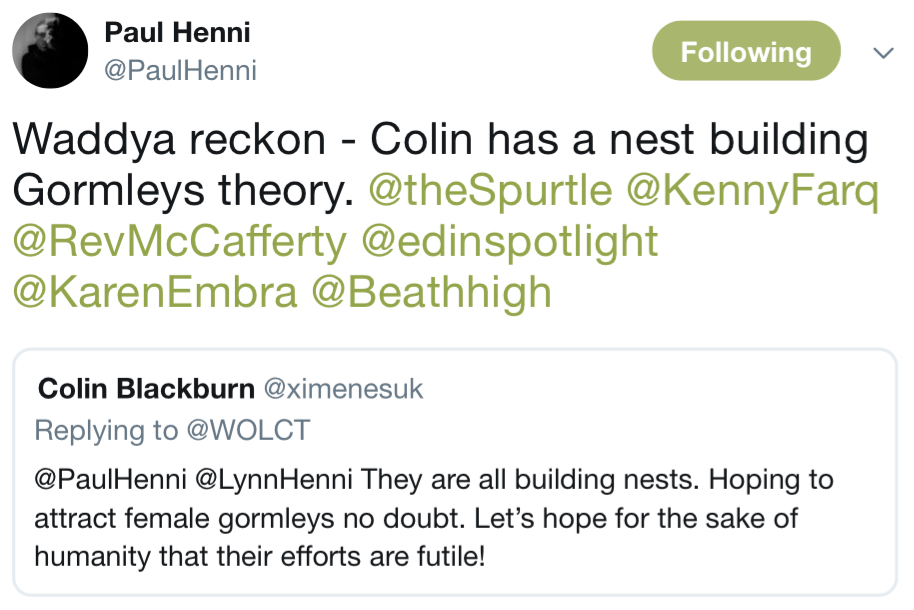