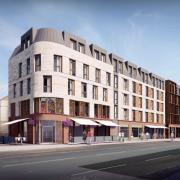 As part of that appeal process (PPA-230-2274, CAC-230-2004), in the last few days a joint submission opposing the proposal has been made by Leith Central, Leith Harbour, Leith Links, and Leith Harbour & Newhaven Community Councils.

For the convenience of readers, we summarise the 20-page document below. However, as a seriously impressive piece of work and model of its kind, we also recommend readers peruse it in full HERE (6 June) at their leisure.

All three CCs made written objections to Drum’s plans last year, and combined as a joint deputation to the Planning Authority on 30 January 2019.

Their current submission reaffirms all the points made previously, but provides additional detail and new grounds for objection which we outline below.

The summary presented above is useful as far as it goes.

But it comes nowhere near conveying the densely reasoned detail of the original, its fastidious attention to relevant policy contexts, its clarity of expression and calmness of tone, its frequent and nicely understated bombshells.

This is a document produced by unpaid volunteers who have expended God knows how many hours researching and crafting it and will probably never receive the level of recognition or thanks they deserve.

With community council elections across the city coming up this autumn, it would be good if this joint submission inspired a fresh crop of locals to find out more, step up, and take an active role on the first rung of local democracy.

I write to correct the 86% percentage cited in your article. In our submission, we used three ratios:
Arguably, the first (highest number) is the most important one when discussing vibrancy. Offices and Workshops are relevant to employment numbers, while the workshops' timber warehouse and joiner usages provided the area with vital support services.