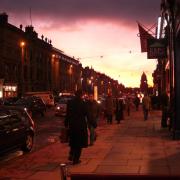 If our memory of the film Titanic serves correctly, some people chose to play violins while the great liner slipped beneath the waves. The Emperor Nero, famously, preferred to rearrange deckchairs whilst the capital of the ancient world burned to the ground. But in the Athens of the North, facing budgetary meltdown, we do things differently: the City of Edinburgh Council fiddles with its fairy lights.

These will be in addition to 22 such points already in existence locally, but it is unclear whether additional 'festive infrastructure' is to be erected or the usual amount is to be held up more firmly. Certainly, the Council's application derives from a public safety official.

These galvanised steel 4-bolt anchor plates have been used before, with one 'pull-test failure' in December 2010 at 139 George Street. However, subsequent investigation showed this to have been caused by a cavity behind indented masonry reducing the bond, and repairs were effected. Power for the catenaries will come from dedicated wall supply boxes located in basements to the south of the street.

Barclay's Nominees (George Yard) Ltd seek listed building consent for minor alterations to already consented plans for a hotel, restaurant, office and retail space at 10–14 Princes Street and 16 Register Street (Ref. 11/00981/LBC). Ventilation louvers on the north elevation have been increased, a stainless steel pilaster on the south elevation has been replaced by a natural stone one. The roof level at the western top corner has been stepped down 'to reduce any impact on the chimney'.

At 18–20 Greenside Place, the Playhouse Theatre seeks listed building consent to alter its box office and front-of-house office (Ref. 11/01137/LBC). Plans appear to show that the Playhouse intends to employ mostly naked Max Headroom-style staff with square heads and no legs. With superb sniffiness, Gifford et al. (1984) describe the Category B-listed building thus: 'Decoratively uninspired, and offering nothing to the devotees of the intimate theatre, it is nonetheless admirably spacious'.