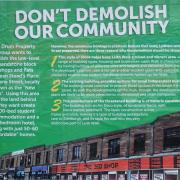 Developers and local community members met last night at Out of the Blue to discuss proposals for major changes on Stead’s Place and Jane Street. Jane Carnall was there, and sent us this report.

Chairing the event was Ben Macpherson, who is – as he reminded us – the constituency MSP for Edinburgh Northern & Leith (including Leith Walk).

The panel was split between: architect Michael Halliday (of Halliday Fraser Munro, who will design the proposed building); Fife Hyland (Communications Director for Drum Property, the developers who now own Stead's Place); and Ian Hood, Jane Rankin, and Linda Somerville from the campaign group Save Leith Walk).

This was a lively and polite meeting, though at one point Hyland assured us that he understood Leith having worked for five years for Hibs, and behind him, quite sharply, a restless dog barked loudly. A voice from the audience said ‘Hearts fan!’

Halliday and Hyland assured us repeatedly that they wanted community input, that they wanted the community with them on this project, which would certainly benefit the local community by trickle-down economics. But there was a fundamental and probably irreconcilable divide.

Drum Property wants to demolish the red sandstone building with the black marble fascia that houses Leith Depot, the Bed Shop and other local businesses. In its place they plan to build a five-storey block to include accommodation for 500 students.

Most people at the meeting wanted to know how they could convince Drum Property not to demolish. It's hard to see how these two aims could compromise, and not hard to see that Edinburgh Council will, as ever, side with the property developers over the wishes of local residents.

The student residence blocks further up Leith Walk may be soulless and characterless, but the greyfield site they replaced was of no use to anyone: better to have a student block than a derelict building. What Drum Property plan to do with St Margaret's House (on London Road) and Stead’s Place is demolish a flourishing and economically active community and rebuild to maximise their profit from the site.

They assure us that their profit will lead to trickle-down benefits for the local community, and they are happy to offer cosmetic changes to their plans, such as saving materials from the frontage to create a street-level facade that may look something like the original design.

Ben Macpherson suggested that the next meeting might discuss the proposed plans for the new build after demolition, suggesting that he doesn't have any hope that local residents can force Edinburgh Council to put the local community ahead of private-sector profit

Linda Somerville made a passionate speech about how the Council should learn to put the people of Edinburgh first, and Ian Hood reminded everyone to sign the petition and donate to the crowdfunder.

Drum Property, however, has City of London finance on its side, and money talks most eloquently, especially, of course, to City of Edinburgh Council.

UPDATE (21.4.18): Ben Macpherson MSP has contacted Spurtle by email concerning Paragraph 9 above ('Ben Macpherson suggested that the next meeting …'):

In no way did I make such an insinuation. Much of the meeting had been about the developer’s plans and I simply said that any further meeting might want to scrutinise the developer’s plans/designs as they come forward. I very much want to see the current sandstone block maintained and don’t believe that any demolition is at all inevitable. I have been working with the Save Leith Walk campaign to help make sure the community’s voice is heard.