HOW St ANDREW SQUARE WAS MEANT TO BE 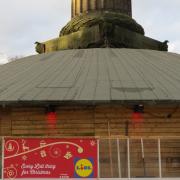 On Monday we reported a recent planning decision in St Andrew Square, and lamented the current condition of the Gardens.

In researching that story, we found references to the original principles behind opening the area to the public, but could not find an original document laying out those principles on the Council's online Planning Portal.

It is still not available there, although we understand that Spurtle's prompting means it will appear soon.

Nevertheless, we have now obtained from elsewhere within the Council a copy of the 'project rational' –  promoted jointly by the City of Edinburgh Council (CEC) and Scottish Enterprise Edinburgh and Lothian (SEEL) in partnership with the City Centre Management Company (CCMCo) and the World Heritage Trust (EWHT) as part of the Capital Streets Programme.

This document refers to the permanent changes envisaged for the Gardens, not the temporary additions which Essential Edinburgh encourages with such gusto. However, as a statement of intent, as an outline of what councillors thought they were getting when they approved the scheme, it uncovers a quite astonishing gulf between aspiration and today's reality.

We reproduce it unedited and in full below. We would welcome your comments.

The St Andrews Square public realm project is being promoted jointly by the City of Edinburgh Council (CEC) and Scottish Enterprise Edinburgh and Lothian (SEEL) in partnership with the City Centre Management Company (CCMCo) and the World Heritage Trust (EWHT) as part of the Capital Streets Programme. The project is being promoted to help deliver on widespread aims for Edinburgh’s City Centre that includes: economic development, public life, heritage management and sustainable development and movement. The principles that underpin these aims include:

Initial exploration of these principles showed the challenges to be faced by the principal stakeholders in reaching consensus about the drivers of the design. In mid 2005, the principal stakeholders met under the chairmanship of the Convener of Planning (Cllr Trevor Davies) who together with the Director of City Development, the Head of Planning, the Head of Transportation, Head of Conservation and the City Centre Management Company and World Heritage Trust represented at Chief Executive and Board level together with representatives of SEEL, Historic Scotland and the designers appointed to the project (Gillespies) resolved the sensitivities and balances necessary to build a consensus for design development, planning approval and subsequent implementation of the project. The parties agreed that:

The design which had been produced in pursuit of these principles and the wider aims expressed at the outset of this paper also seeks to follow the principle of “preserve or enhance”. The design which has been submitted for planning consent has sought to resolve the challenges embedded in brief by designing out unnecessary interventions wherever possible and designing in necessary interventions in a sympathetic and understated manner.

The design seeks, in so far as it is possible today, to recover the original qualities of Craig’s Plan. St Andrew’s Square has been adapted over the years. Some ranges of original 18th century buildings remain on the north side of the Square, but over time new buildings – some good, some less so – have been built and the Square now has buildings from all periods – up to and including the 21st century. St Andrew Square in this regard is different to Charlotte Square, which is by and large intact. Other changes to Craig’s plan include the substitution of the church on the eastern side with the mansion that is now the headquarters of the Royal Bank of Scotland and the introduction of the Melville monument in the centre of the gardens in the mid-19th century.

The principal design challenge for the street concerns the recovery of the original geometry of Craig’s plan in such a way that contemporary movement can be achieved including in due course the incorporation of the new tram system. All parties agree that this has been achieved with elegance and simplicity

So far as the gardens are concerned all parties agree that the best record of the original intent is given by the mid-19th century Ordnance Plan that shows an ordered square with private pleasure gardens surrounded by gated railings. Inside the garden an outer ring of trees enclose an open and informal garden laid out around the monument. It is widely agreed, and a matter of record, that the original intent for the gardens has been severely compromised over the centuries, particularly through the introduction of inappropriate footpath layouts and ornamental species. Historic Scotland supports a contemporary recovery of the key qualities of the garden space.

The principal challenge for the design of the gardens is the reconciliation of the original intent for a private Georgian pleasure Garden with the rigours of a contemporary and public 21st green space which introduces a diagonal public route. Opening up the private gardens to facilitate public access involves overcoming a number of obstacles and removing a number of trees that are in difficult positions to provide for the needs of a public garden and indeed to recover the original design intent with the outer ring of trees and an open garden in the centre.

A key concern throughout the design process has been the quality of setting for Melville’s Monument. Any contemporary use of the gardens affording a number of access points – whether orthogonal or diagonal - is likely to create a desire line to and past the monument. All parties have agreed that it would be unfortunate if Melville’s Monument were simply to sit at a crossroads of paths whether laid out on the diagonal or the axis. The proposed design introduces a pool at the south-west of the gardens to deflect pedestrians on a slow curve around the garden in order to enclose a circular lawn which acts as a setting for the Monument. This has the added benefit that the visitor entering from the south-west corner, walks around the pool and approaches the monument face-on from the west along the axis of George Street rather than on the diagonal. A similar device is achieved from the north and east.

The pool has the added advantage of providing for literal reflection as well as contemplation by viewing the ring of trees to the south-west across a still body of water bound together with edge planting. In contrast, pedestrians approaching from the south will see Melville’s monument reflected in the pool. The pool has the further benefit of encouraging bio-diversity in the first new town where water is almost entirely absent for wildlife. The pool, curved paths and the counterpoint pavilion to the north-east of the garden are all intended as subtle devices to subtly manage visitors in the garden, to provide a “slow-space” of tranquillity for reflection in contrast to the hard geometric footways in the streetscape outside the gardens.

The owners of the garden unanimously support the proposals and will enter into an agreement with the City Centre Management Company to lease the gardens for the public good.

In conclusion, the design for St Andrew Square – gardens and streets - is a careful thoughtful, simple and elegant composition for the square as whole which recovers the original intent of Craig’s plan on one hand and provides for contemporary needs of the public community on the other. It is commended for consent.

How does this 'enhance setting of the A listed Melville Monument'?

@theSpurtle @EdinburghWH in the same way the new buildings on the south side of St Andrew Sq enhance the 1st New Town?

Kate Johnston Edinburgh council seem to be happy to turn our beautiful city into a poor imitation of a very sad funfair. Surely our visitors deserve to see it as we do for the few short months that it is not vandalised by absurd markets, funfairs and inappropriate event spaces. Surely German markets should be visited in Germany and we should have our own traditions.

@theSpurtle @joycemcm Thx for digging this out. Intention of all at time was for St A Sq to be a public garden. Not mud, shops and carousels

papa was a rodeo ‏@papawasarodeo

Dominic Berry The gardens were renovated at colossal expense, but the job was not done well. The layout should have been done to a Georgian, rather than a modern plan: this would have meant a symmetrical layout, and no three-inch deep pond. And it was absolutely imperative that the paths be wide enough to accommmodate all the pedestrian traffic, to save the grass from being turned into mud. Done properly, the gardens would have been one of the sights of Edinburgh. It is not too late for a re-think. But I think the councillors simply aren't up to the job, because they are unaware that Edinburgh is not the same as Birmingham or Manchester.

David Tant The square is Edinburgh's Disgrace.
I used to think Queen Street Gardens should be public but now, sadly, am convinced they must remain in the hands of those who will protect them.

Gaye Cleary Interesting that the intention was to have a "a “slow-space” of tranquility for reflection" - I'm not convinced they've achieved that!

E-mail from Alison Campbell: Can I just make the observation that the "stake holders" of the Project Rational document appear to have morphed into the skate holders of today's Lidl ice rink.

Too many cooks stirring up an ugly tasteless broth, ultimately enhancing nothing.

Kevin Adamson interesting, I suppose the document should be on the planning site, so why is it not there?

Broughton Spurtle Apparently it was considered 'sensitive'. Spurtle objected. It's now being 'desensitised' by technicians and should appear soon.

Fergus Smith "Desensitised". What are they doing? Sitting it in a room and showing it looped footage of planning disasters?

@KenWilson84 @davies_trevor @theSpurtle @joycemcm Best just lock the gates for another couple of hundred years & keep the folk out, eh?

@brianjaffa @davies_trevor @theSpurtle @joycemcm no need to be like that, I'm all for public access but not when things look so gimcrack

@davies_trevor @theSpurtle @joycemcm I would be amazed if there has been a year without any events since it opened to the public.

@KenWilson84 @brianjaffa @davies_trevor @theSpurtle Well I don't mind if it's just Christmas & August. Big builds beyond that a bad idea.

@davies_trevor @theSpurtle @joycemcm my clear recollection was that some temporary events were to be encouraged for the festivals.

BID approval by CEC is perhaps point at which public can most effectively apply pressure to restore order in St Andrew Square? @andywightman

Dominic Berry A few years ago the gardens in all the Georgian squares in Bloomsbury (London) were tidied up. The bushes were cut back, lawns reseeded, paths reinstated, benches were provided, and the railings were replaced if they had been removed during the war; and all the gardens were opened to the public for quiet enjoyment. It has hugely improved the area. And, to my knowledge, Camden Council has never held any kind of event or put up tents or shacks in any of them.