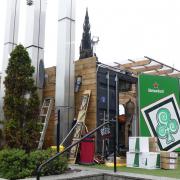 Their proposal – comprising a public house (the previously consented Malone’s on the Mall), bar areas (champagne, gin and seafood bars etc.), a beer garden, live stage areas, hot-food kiosks, associated seating area, toilets, and other associated structures including a ‘stretch-tent’ marquee – is up and running.

Even though most of it has yet to be officially consented. 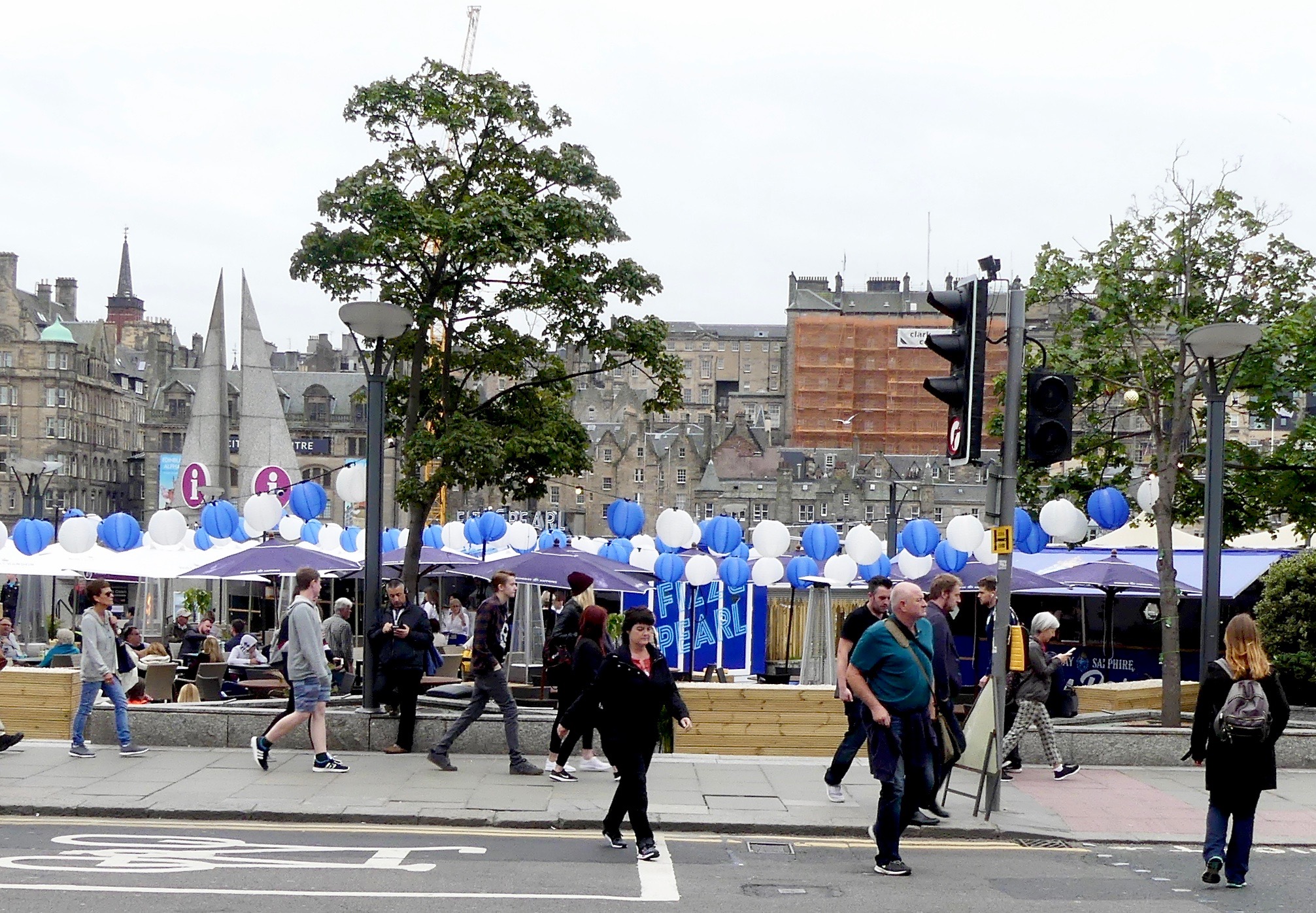 It is billed as existing for only a ‘short period’ in the months of June, July, August, and from mid-November to mid-January in the years 2017–2019 (a period, they note, of less than 5 months in any one calendar year). Operating hours would be 10am–11pm (extended to midnight during the Festival/Fringe).

Pre-application discussion was undertaken with City of Edinburgh Council, who advised on an acceptable time period. Spurtle is not clear whether Keasim took the Council’s advice. Construction of the site preceded the application because the ‘Applicant did not believe permission was required due to [the] temporary nature of the proposal’.

The Irish-themed bar Malone’s on the Mall (along with a Bungydome) was approved in 2016 (Ref. 16/04038/FUL). Apparently its temporary nature was not deemed likely to have a ‘significant impact’ on the World Heritage Site, listed buildings or conservation areas. A similar view allowed construction of temporary Christmas attractions last December (Ref. 16/04882/FUL). 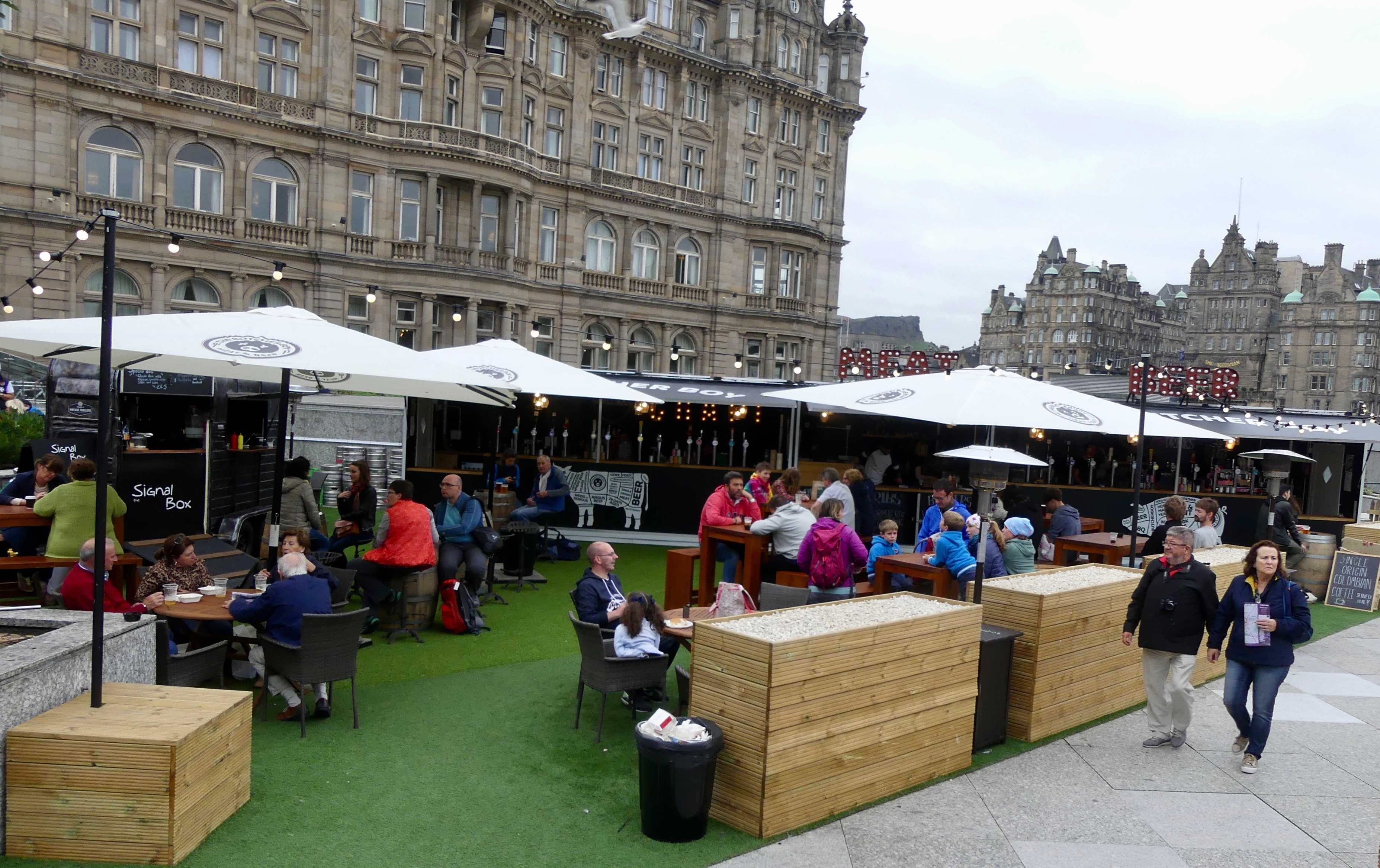 Activity, jobs, and views with booze

The current proposal, write Keasim’s agents Ferguson Planning, ‘simply seeks to bring an inactive area of the city back into use by offering residents and visitors a city centre location to relax and socialize [in] while enjoying the stunning views of the city. The proposal is an enhancement to what currently exists, bringing an extra security presence to an area well known for anti-social behaviour’.

They estimate the Festival Village would create jobs for over 100 people, including 30 bar staff, 20 security staff and 30–40 musicians.

They say the proposal, being lower than the already approved Bungydome, would have even less of an impact. It would reduce anti-social behaviour hereabouts, would not disturb local residents (of whom there are few nearby), and is situated within the Core Retail designation of the City Centre in a ‘preferred location’ for entertainment uses as outlined in Policy Ret 7 of the Council’s Local Development Plan.

Basically, it’s all going to be wonderful. 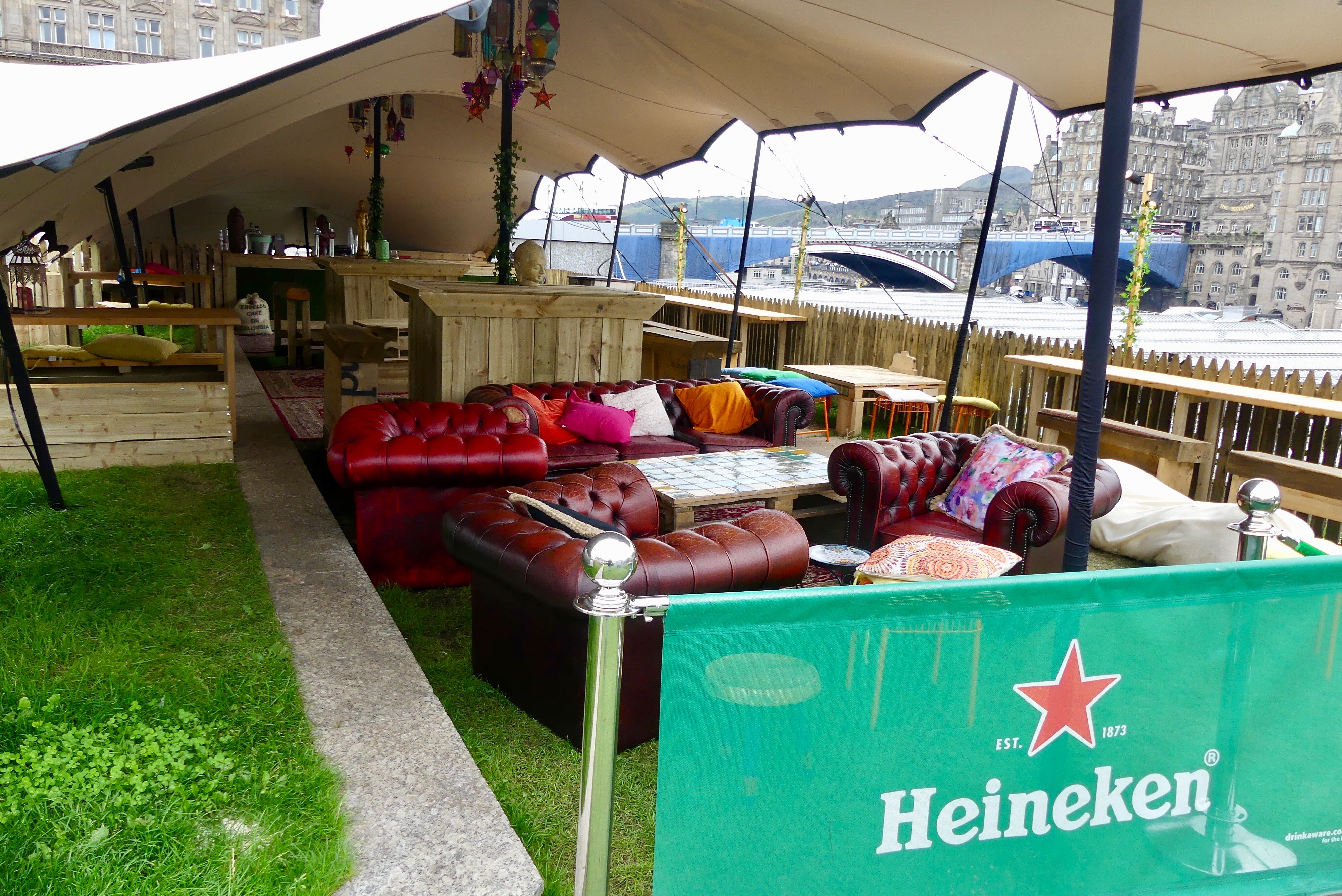 Hang on a minute … no it's not

The notion that these structures are ‘temporary’ is questionable to say the least. They may operate for a total of only 5 months per year, but they will be semi-permanently present at some point within 6 calendar months per year – perhaps even more if one allows for set-up and break-down.

And surely other entrepreneurs will follow suit. Why shouldn’t they seek permission for temporary villages during the Scottish Storytelling Festival in October, the Science Festival in March and April, the Children’s Festival in May? That would leave September and February temporarily clear so don't worry about lasting impact for the timebeing.

What about noise? Anyone who's ever left their mother in charge of the Hi-Fi knows how amplified music and gin-sodden enthusiasm travel within and beyond buildings, but they travel much further beyond unconfined outdoor venues. There may be very few residents at this end of Princes Street, if one discounts guests and staff in the Balmoral, but the Old Town still contains a few non-AirBnB flats where non-partying locals are entitled to undisturbed rest.

We’re also dubious about the scheme’s supposed merits for controlling bored youths behaving badly on Big Macs, Red Bulls and White Lightning. Are they not simply being displaced? Wouldn't it be better to find them something enjoyable, harmless and affordable to do rather than redesigning the heart of the capital on the back of an envelope?

And in any case, who is to say large numbers of champagne-swilling adults, requiring the presence of 20 security staff, will behave any better? Shoplifting teenagers or raucous grown-ups sicking-up seafood? Take your pick. 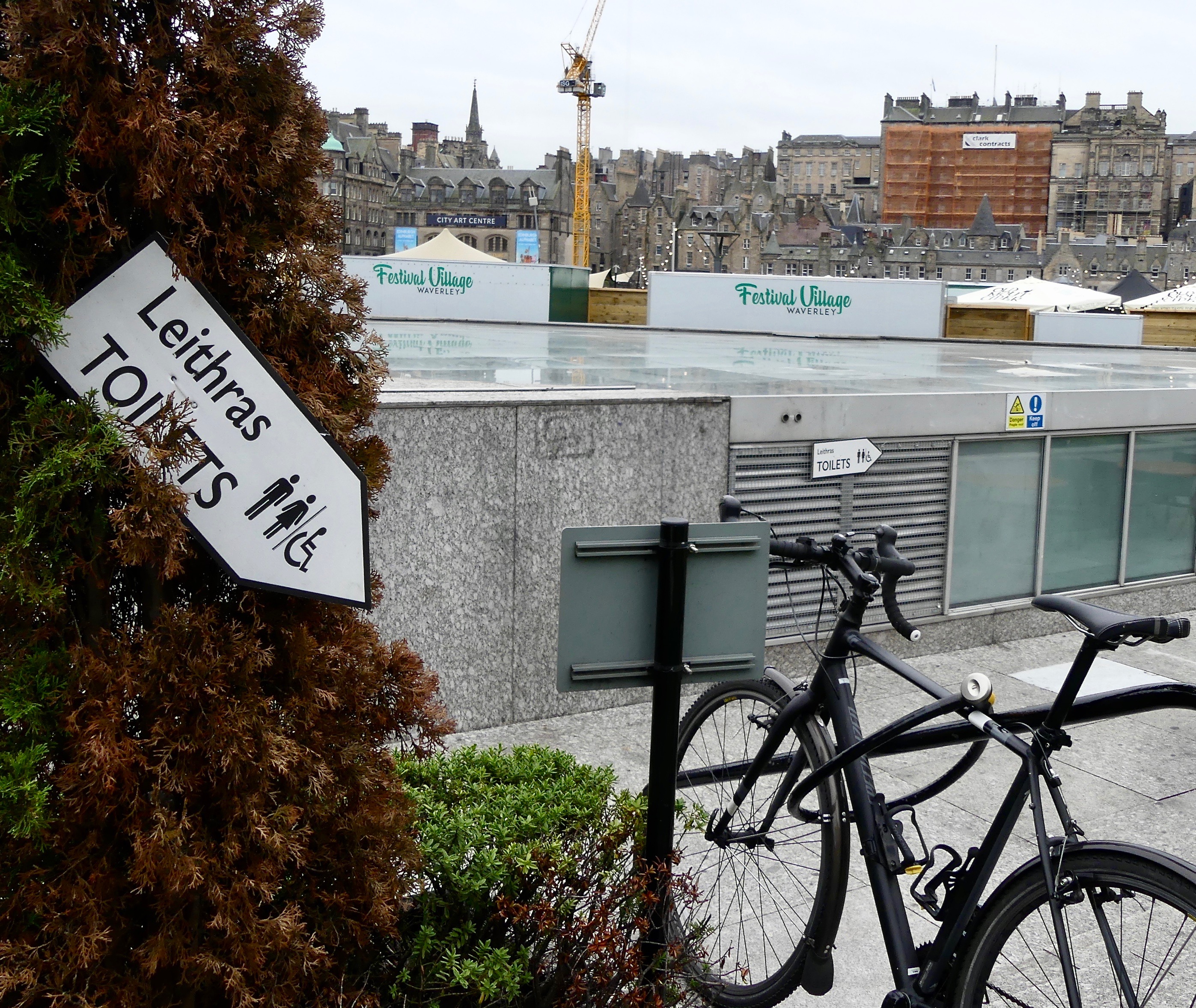 What are we really looking at here? A clutter of shacks, sheds, glorified Portaloos, corrugated plastic, booths, tents, parasols, picket-fencing and a converted horsebox smack bang in the middle of one of Edinburgh’s most iconic settings.

They may not ascend as high as the Bungydome (and what a stalking horse that looks like in retrospect), but neither are they invisible, inaudible, discreet or architecturally pleasing. They are not the product of a measured, thought-through vision for developing Edinburgh.

If we must further enliven what is already a lively city centre, then fine. But let’s do it with sensitively designed, purpose-built, permanent structures which complement their world-renowned surroundings.

We don’t blame Keasim for all this. They’ve spotted a gap in the market and a gap on the roof. Good for them! But this proposal is not good for Edinburgh in the long term. It’s a guddle … one which an opportunistic, cash-strapped, tourism-obsessed Council like ours will find very hard to resist. 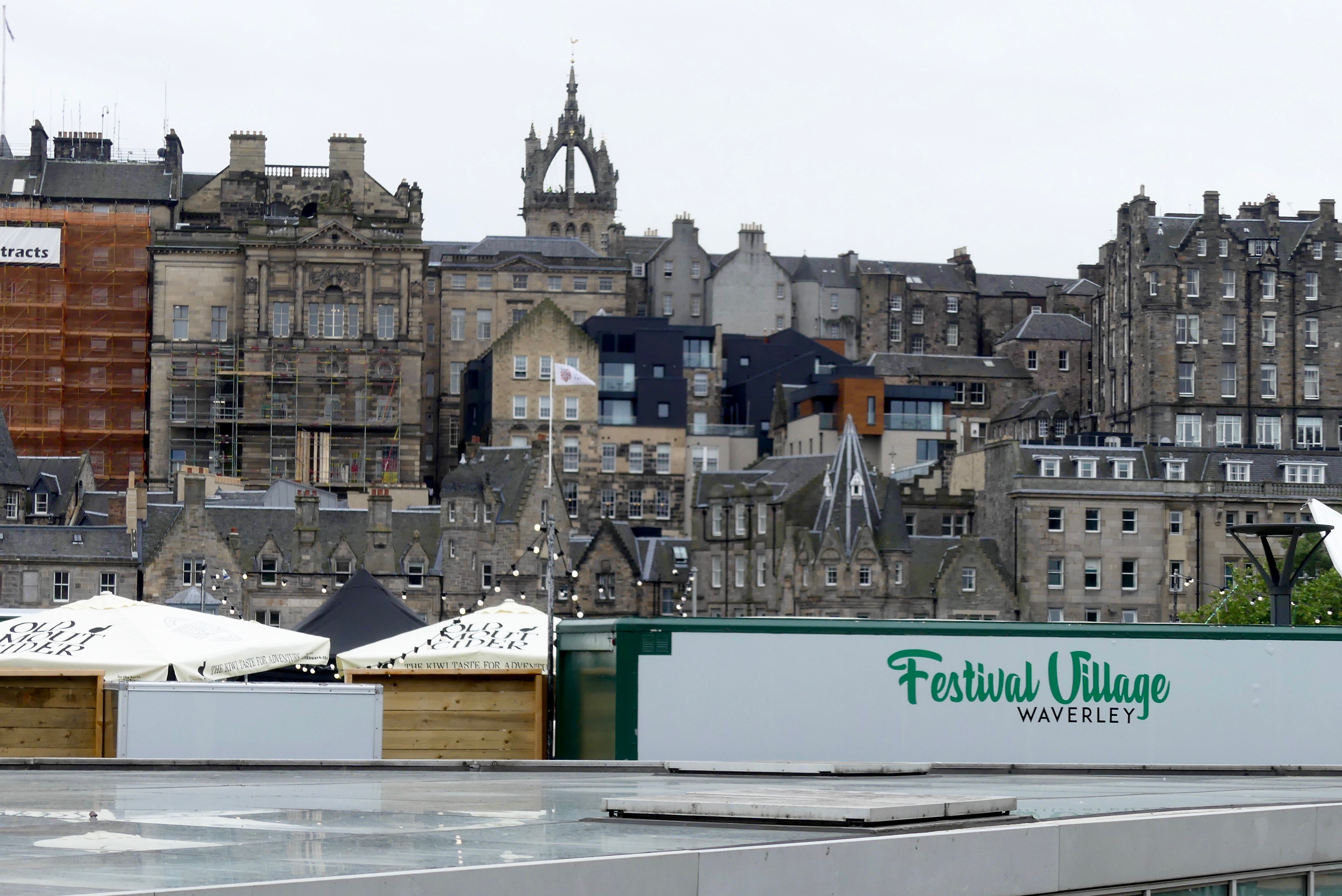 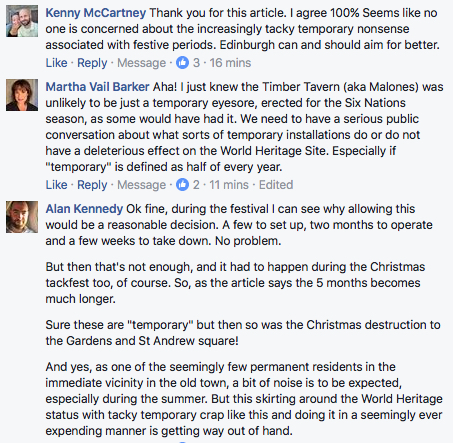 E-mail from David Young: It's all of a piece with Edinburgh Council's aspiration to be (as one commentator memorably put it) 'the Duracell Bunny of the city-break circuit'.

After all, this is the town where Hogmanay will soon stretch – hellishly – all the way to Burns Night, because the bosses at Underbelly feel that three days of raucous celebrations aren't quite enough, and January in Edinburgh is too 'dark and quiet' anyway.

So it'll be no surprise if a 'temporary' Festival Village made of canvas and balloons gets enthusiastic permission to squat and throb noisily in the very centre of the capital for almost six months of the year.