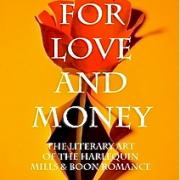 Readers of genre fiction often grow tired of justifying their particular taste against charges of literary inferiority. Not so Broughton resident Laura Vivanco, whose closely reasoned and wide-ranging academic defence of Harlequin Mills & Boon novels – For Love and Money – was published this week.

‘Having spent a great deal of time reading HM&B romances, I would argue that many are well-written, skilfully crafted works which can and do engage the minds as well as the emotions of their readers, and a few are small masterpieces,’ she writes.

Mills & Boon began in 1908 (Harlequin is its North American parent company), and now publishes around 110 titles per month. Its style has been loosely described by the Romance Writers Association of America as having ‘a central love story and an emotionally satisfying and optimistic ending’. This tradition Vivanco traces back to ancient myths, Biblical stories, and popular tales written in Greek under the Eastern Roman Empire.

However, the requirements of precise pacing, tight plotting and ‘exquisitely brief characterizations’ demand great authorial craft from HM&B writers; so much so that one of their number – Jennifer Cruisie – has claimed: ‘It is truly as fine a form of fiction as the sonnet is for poetry’.

Despite the strict adherence to rules theoretically expected of its practitioners, the HM&B genre has always reinvented itself. Authors are forever experimenting with new fictional modes, and cannot help but reflect the changing world around them. Certainly, few readers have failed to notice (or regretted) that the stories are considerably ‘friskier’ today than they were even 20 years ago.

HM&B books are not simply mass-produced commodities, churned out to the same formula. ‘Far from being uniformly escapist fantasies,’ says Vivanco, ‘many of them have addressed serious issues, including the plight of post-Second World War refugees, threats to marine mammals, and HIV/AIDS’.

[img_assist|nid=2531|title=Mary Burchell|desc=|link=node|align=right|width=129|height=200]So which examples of the genre, we wondered, would she pick out as personal favourites?

'That's difficult,' she replied, 'because there are so many, but since I first came to romance via Georgette Heyer, I'll put her on my shortlist. I'm cheating a little, since she only wrote one novel for Mills & Boon: The Transformation of Philip Jettan: A Comedy of Manners (1923). She used the pseudonym Stella Martin and when the novel was reprinted (in a revised version) by other publishers it appeared under her real name and had been retitled Powder and Patch. Some of her later novels were reprinted in the US by Harlequin not so very long ago, though.

'A favourite whom I discovered in the course of my research is Mary Burchell. She used the proceeds from the sales of some of her early Mills & Boons to help refugees from Nazi Germany (more details here).

And what about a title for blushing Spurtle novices to cut their teeth on?

'That's even more difficult, because it very much depends on their tastes. Each of the Mills & Boon lines are different, and someone who loves the billionaire tycoons of the Modern line might have no interest in the Medical line, for example. There are historical romances, chick-lit style romances, paranormal romances, romantic suspense romances and plenty of other types too. Can I cheat (again) and suggest that someone who hasn't read any Mills & Boons could read my book? Hopefully some of the romances I discuss would pique their interest.'

Laura Vivanco’s For Love and Money: The Literary Art of the Harlequin Mills & Boon Romance is available in 3 formats: