TURN OF THE YEAR ON BROUGHTON STREET 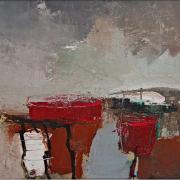 Union Gallery's offering this month is a group exhibition featuring work by 12 contemporary Scottish artists, most of whom will be familiar to regular visitors here.

There is no single subject matter or approach unifying the paintings on show, although in picking out a few personal favourites it has become apparent that themes concerning transition are common to several.

Jackie Gardiner is a newcomer to the Union, whose three attractive and intriguing 'harbour tales' reflect on the form and presence of workaday boats under grey skies. Her vessels perch unstably at the threshold between air and water, between the natural and the artificial, between garrulous human activity and the silence or tumult of the elements. Gardiner examines this space and its bleeding relationships, capturing – as in 'At the Boatyard' (right) – the beauty and sadness of human endeavour. Are these boats in the process of being built? Or do the oozing blacks and cherry reds turning to rust already signify decay?

Drummond Mayo's works are often celebrations of the thickening mystery of light, its way of multiplying or obscuring definition. 'The Pool' (below) is deceptively complex in this pursuit. At one level it appears simply decorative: a  stylised depiction of an ornamental carp pool, the golden fish moving fluidly within geometric confines. Such an effect is amplified by the beautiful gold frame (not pictured) which surrounds this work. But the same frame also draws attention to the glass between the viewer and the work: another reflective barrier in which the viewer may catch himself, like the surface of the water in which (or above which) a shadowy image of the artist is faintly visible. What at first glimpse appeared to be a flat study of the superficial ends as a rather dizzying, vertical exploration of depth and artistic stance.

I have little new to say about Ian Rawnsley's work. I enjoy and admire now what I first enjoyed and admired two years ago in his dramatically evoked Scottish and Irish coastal scenes: the intimacy of coves and beaches, the clash or embrace of water and land, the ambiguous promise of deep ocean and limitless sky. Will Rawnsley ever tire of these changing iterations? Hopefully not. Below is his 'Night Shore IV'.

Edinburgh College of Art graduate Tadeusz Deregowski sees his work as 'in the line of both travel painter-diarists such as Edward Lear or Turner, and expressionist painters such as Bonnard or Joan Eardley'. An itinerant 'explorer, artist and holidaymaker', he creates postcard-sized landscapes and portraits daily, capturing the less obvious, little known faces of the people and places he visits, and selling them as he goes to fund his travels. Once in a blue moon he calls at Broughton Street with a new collection, which this year included a modestly proportioned (13.2 x 11.7 cms) study of 'Rooftops, Douz, Tunisia' (below).

There are works here also by Cathy Campbell, Janet Melrose, Jenny Matthews, James Newton Adams, Mark Nicholas Edward, Barbara Franc and Henry Kondracki, any one of which would be worth a mention. However, a personal preference wins the day: Hazel Cashmore's 'Turn of the Year' (below). There is something irresistibly epic about the Caithness landscape, which Cashmore brilliantly conveys in this textured, ripening field set against the rain-filled flow-country beyond. A curious mixture of warmth, plenty and foreboding, it is a wonderfully atmospheric expression of autumn in the darkening Far North.  AM