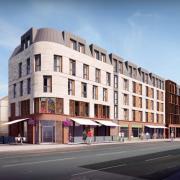 Edinburgh University has abandoned its involvement with Drum Property Group’s controversial proposal to develop student accommodation, a hotel, and shops on and around Stead’s Place.

The news emerged in a series of briefings with local politicians and stakeholders (including the Save Leith Walk Campaign) on Friday.

A University spokesperson today confirmed: ‘The University has kept a close interest in the proposed plan for Stead’s Place and, after giving it careful consideration, has decided not to pursue that interest any further.’

Not exactly brimming with detail, but telling nevertheless.

Spurtle understands that University officials had hoped Drum would revise its plans to take more account of local opinion and official guidance, particularly following the comprehensive refusal of planning consent back in January.

However, when, on 3 May, Drum instead appealed to the Scottish Government (PPA-230-2274), the University decided to cut its ties.

Spurtle also understands that increasingly widespread and vocal disapproval of the plan among students and staff played a part in that decision.

In a statement issued this morning, a Save Leith Walk spokesperson reacted to the news with muted enthusiasm: ‘We appreciate that the University of Edinburgh have finally acknowledged the concerns of our community. Unfortunately, this has come too late for many of the local businesses in Stead's Place that have been forced to close.’

Turning to the bigger picture, the statement continued, ‘Save Leith Walk has been working to build community involvement in development decisions and we would appeal to property developers, student accommodation providers and other developers to put community consultation at the heart of their design process and not simply as a response to planning requirements.’

By any standard, this new twist is a major setback to Drum’s ambitions. The University’s involvement had hitherto lent a fig leaf of respectability to what most locals and neutral observers regard as a deeply inappropriate scheme.

Now, while Edinburgh University’s withdrawal is not a final nail in the coffin of Drum’s proposal, the lid is certainly more firmly attached than it was before.

Members of the public may make representations to the Scottish Government Reporter until 6 June.